Home Versus Comparison of Tata Zest vs Honda Amaze 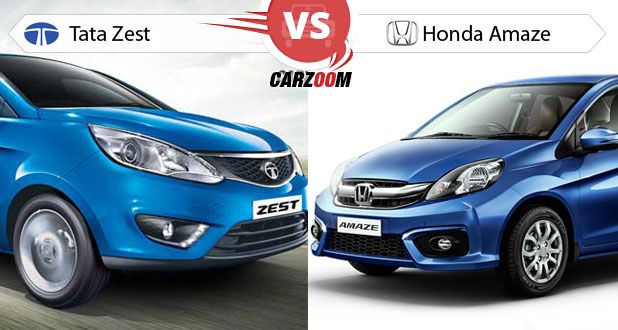 Honda is becoming more famous and adding more number of rivals into its list day by day. Today, we bring you yet another comparison between a car which has become popular in short span of time with a car which has changed the game for a giant like Honda, with the revolution it has carried over with it in the Compact Sedan or Sub 4m car market. On the other hand, Tata Zest which was launched in 2014 hasn’t able to repeat the success of Indigo eCs and not changed the fate of the company in that vary segment despite being the competitive product. Honda has now updated Amaze sedan with mild update in exterior and interior department while powertrains remains same. So let’s compare both these cars

With a variety of 10 variants to choose from, Honda brings Amaze at a very effectively affordable and reasonable price range of Rs. 5.30-8.20 lakhs on the road to keep up the heat going in the market. Tata launched Zest between the Rs. 5.07 – 8.51 Lakhs. Tata sub 4m metre sedan starts with affordable price range as compared to Amaze’s while vice versa when we talk about its top version.

On the contrary, the market rival Honda, similarly offers two engine trims in both fuel types with 1.2 liter 4-Cyl, SOHC i-VTEC revolution engine and a 1.5 liter 4-Cyl, DOHC i-DTEC evolutionary engine. Both of the engines are more performance oriented and light weight born out of Aluminum metal to reduce overall weight of the car and compensate that weight with more power filled instead. Making Honda’s diesel engines out of the most power oriented in the market with figures of 98.6Bhp and 200Nm, while the petrol engines are no less with [email protected] and [email protected] figures spilling out of the engines at low weight and with advanced turbo chargers to infuse air and boost into the engines for not only high end, but genuine low end grunt from the engines as well.

Apart from that, Tata Zest is mated to an F-tronic 5-speed AMT with diesel engine option while petrol version gets a 5-speed MT.  Honda gives you very smooth engines with newly introduced 5-speed CVT in petrol while the diesel remains manually shifted with a 5-speed MT.

In the mileage segment again, with an immense bundle of powerful fun under the bonnet, Honda’s new generation engines will never let you down on mileage either with India oriented all-round performance giving I-VTEC and I-DTEC engines which return class standard average of 18.1 KPL from AT and 17.8 KPL from MT on petrol, while the single transmission diesel engine returns a great 25.8 KPL. Tata somehow manages to stand shoulder to shoulder with Petrol trim’s mileage with 17.6 KPL but in diesel it falls behind with 23 KPL. Honda is the winner in this section.

In riding counts, it’s going to be worth noticing how Tata proves its newness which says that Zest is the more driver friendly car in the segment which is featured with a more stable set of independent McPherson Struts suspension with 3-link rear and anti-roll bars for best in class, stable and safe ride and a better cornering features will be there with an advanced 9 generation ABS system with two front airbags, speed sensing auto locks on all doors, dual horns .On the other hand, Honda’s Amaze handles well but not best in its class with a deliberate pull at corners which seems fairly disturbing based on a set of common McPherson Struts for both front and rear.

While on the safety measures, Honda is such a name that it packs Amaze with an ABS with EBD, dual front Airbags, Pre-tensioner seatbelts, an engine immobilizer with everything packed into an ACE body stricter. But still, with great on paper specs we believe Tata is better sedan in market.

Well to be really honest, seeing the outer looks of the Zest, it feels as Tata puts their heart out it there, Tata Zest with evenly finished body structure and comparable overall body stance of both the cars. Tata, with the concept of Compact Sedan way too seriously and design the Zest, in agile and aggressive way.

Inside as well, both are cars are almost similar with beige-black interior theme dominating all over the cabin having a high quality fit and finish done inside with tilt steering, steering mounted controls, sporty Speedo metres in semi-automatic theme, etc.

While Zest has an upper hand in the infotainment department as it features a company fitted HARMAN infotainment system and pre-loaded maps for better usability, Amaze on the other hand has dropped the AVN infotainment system and now uses a basic audio system but comes handy with par excellence aspects in comforts with best in class space for front and rear passengers, a central arm rest unit for rear bench including a bottle holding area and seat height adjustments for the driver’s seat while 5 people can easily seat in Zest. In Amaze, they fit like a heated knife on butter with enough space for everyone’s head, shoulders and knees making it a rebel and a winner in this section as well with an only advantage to Zest for having a better infotainment system.

With enough power and grunt under the hood, Zest would have given hard competition of Honda’s amaze but Tata’s questionable sales service and durability, somewhat dented the sales of compact sedan. However, zest is a great product but for some unknown reasons it is not able to shine through as it deserve. Honda’s main advantage has been its brand name and great package offer which proved enough to beat Zest. In addition, refresh exteriors and interiors might further give boost to its sales which will make even tougher for Zest to deliver the expected results.