Hyundai Venue, India’s first sub-compact SUV has been finally unveiled . The car will be launched in India on 21st May 2019. It was originally showcased in 2017 as the Carlino concept. The car looks bold and boxy like the concept only. The new Hyundai Venue in India will rival with Maruti Suzuki Vitara Brezza, Tata Nexon, Mahindra XUV300 and the Ford EcoSport. The Venue has a considerable advantage of the success and popularity of its bigger sibling, Creta. Check out its features below:

The Hyundai Venue measures 3995mm in length and has a wheelbase of 2500mm. The width and height stand at 1770mm and 1590mm, respectively.

The Hyundai Venue will be available in three power train options, most likely a new 1.0-liter turbo-petrol engine. It produces 120PS of power and 172Nm of torque while mated to a 6-speed manual. A new 7-speed dual-clutch transmission developed in-house will also be available with this new engine. The other petrol engine is the known 1.2-liter unit found on hatchbacks like the Elite i20 and Grand i10. It produces 83PS and 115Nm while mated to a 5-speed manual.

Diesel variants will be powered by Hyundai’s 1.4-diesel engine with an output of 90PS and 220Nm while mated to a 6-speed manual gearbox. Though, this engine will not be offered with an automatic gearbox.

The Hyundai Venue will also debut the carmaker’s connected car technology called BlueLink. This tech uses an eSIM from Vodafone-Idea for internet access as well as access to vehicle telematics via the BlueLink smartphone application. The app can also be used for remote control features like ignition and AC control, among others.

As far as design is concerned the Venue is quite boxy with smooth edges and design lines like the Creta. The most unique visual detail of the car is its front. It has large Hyundai cascading grille and split headlamp design which seems to be inspired by the new Santa-Fe. The car has indicators on the edge of the bonnet and the headlamps are surrounded by LED DRLs are placed lower on the front bumper. The projector front lamps are placed underneath the headlights. 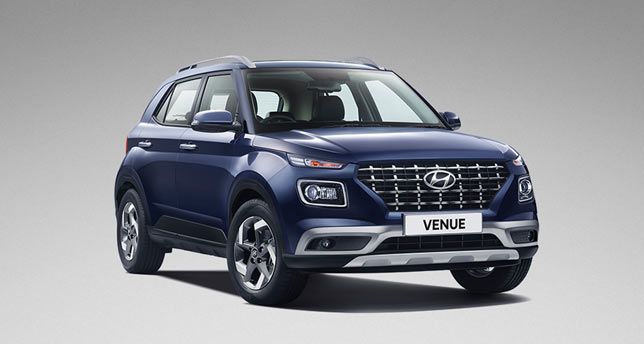 On the back, the styling is clean with a sculpted look. The company has also added a  ‘Turbo’ badge with red lettering for variants powered by the new 1.0-liter turbo petrol engine, which it debuts in India. The LED tail lamps are elegant.

On the interior, the Venue displays a fresh dashboard, it has all back interior with silver bezels around the AC vents. The steering wheel also has a new design and is updated. It also has an infotainment screen, which is flanked by AC vents. The middle portion features climate control while the bottom row features USB ports and a wireless charger. The instrument cluster gets an analog tachometer and speedometer split by a digital MID. 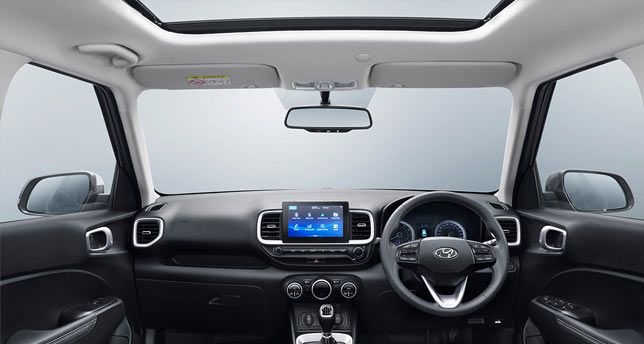 The Venue is well-equipped it also has features like 8-inch floating touchscreen display for the infotainment system, automatic climate control, sunroof, cruise control, and wireless charging too. It will also get rear AC vents and an air purifier.

The car will have six airbags, at least on the top-spec variant. Other safety features that the car will offer include hill assist control, electronic stability control, vehicle stability management, ISOFIX child seat mounts and brake assist too. The standard safety list should include dual-front airbags, ABS with EBD, front passenger seat belt reminders and speed limit alerts.

The all-new Hyundai Venue will be launched on 21st May 2019 with an expected price range of INR 8 lakh to 12 Lakh.