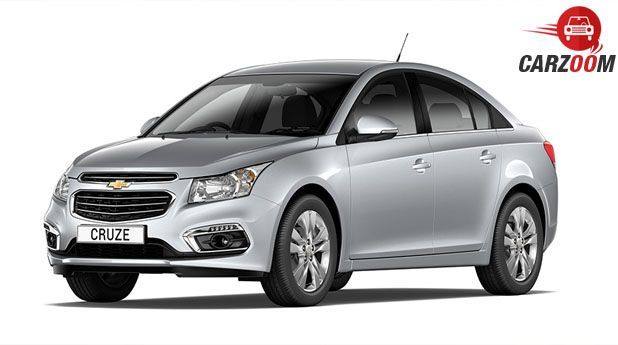 The Chevrolet Cruze, undoubtedly a most well-built as well as popular sedan in the executive sedan segment which has been in the top list of buyer’s choice for long now and has achieved a great success since its launch in 2009. Two years ago, it came with mild updates as well and now Chevrolet has launched facelifted version of the sedan in the price Rs. 13.95 to 16.95 lakh (ex-showroom Delhi) as it started to face stiff competition from the likes of Hyundai Elantra, Toyota Corolla Altis and Volkswagen Jetta which affected the sales of the sedan.

With starting price of Rs. 13.95 lakhs and top variant cost at Rs. 16.95 lakhs it is probably the best buy in the segment.

The car has 4-cylinder In-line VCDi Diesel engine with 6-speed manual transmission gearbox, or a six speed dual clutch automatic transmission. The engine displacement is 1998cc with the max power of [email protected] and torque [email protected] The ARAI certified mileage of this car is 17.3kmpl. While, on driving under definitive condition, the given mileage is approx 14kmpl (on city roads) while the AT variant delivers 14.5kmpl (on highways) and 10.9 on city roads. This mid-sized sedan can attain the top speed of 184kmph and also can achieve the 0-100 km in just 9.8s; this quality makes it a most powerful engine car in its segment.

The Chevrolet hasn’t made any change to the engine of the sedan so except ride quality and power delivery as the last model. Start the engine and hear the Racing car like sound inside but as the engine gets warmer it’s just buttery smooth and soaks up all the bumps thrown at it. The mid range is Cruze’s strongest point while high speed stability is rock solid.

Its design is undoubtedly that best feature which every car lover applauds. The latest update made Cruze a lot shaper than ever thanks to new dual port grille which now has lot of chrome in it. The projector headlamps with LED daytime running lights, chrome plated fog lamps add more flash to the front. Sides remain same except for the new alloy wheels but it could have been designed in a better way. At rear, you get all the elements of previous model though you get thick chrome stripe on the boot lid just to depict that it’s a facelift. Overall, it remains a sporty designed car with vast shoulder and chunky waistline.

The all new Cruze will be launched in India next year so Chevrolet has decided to give this last gen model a mild makeover in order to keep it fresh and in the headlines. You get all the bells and whistles of previous GEN model such as 3 spoke multi function leather pack steering wheel, information cluster with blue lighting, auto climatronic AC, central locking, sunroof, height adjustable driver seat, cruise control etc. Now to elongate the list of premium features, Chevrolet has added 7 inch Mylink infotainment which supports internet radio, Siri eyes, voice recognition, navigation and it doubles up with reverse parking camera display.

This Chevrolet Cruze has always been a wonderful as well as powerful car, weather it’s before updating the version or after. Its sporty, classy and eye-catching design and powerhouse performance has attracted so many car buyers till now. The powertrain has always been influential and fuel efficient flanked by compelling ride and handling abilities.

Chevrolet Cruze has certain issues such as all around comfort, strangled space and off course after-sale service which needs to be improved. Also we’ll have to keep in mind that the rivals have taken the competition to the new level so this update won’t be changing the fate of Cruze drastically.