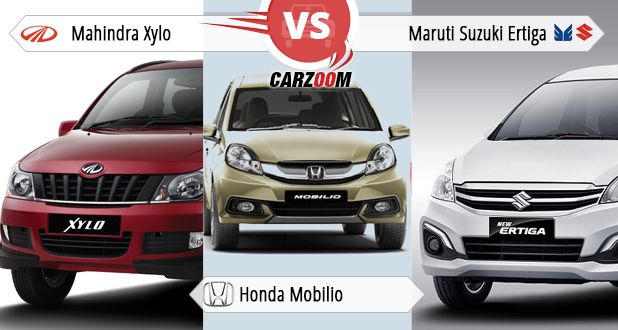 MPV segment was heavily dominated by Mahindra with cars like Xylo till Honda Mobilio and Maruti Ertiga arrived on the scene. Honda Mobilio has been one of the highest selling cars for Honda in recent times but now, hardly sells over 600-700 units a month which is way low as compared to initial start in the market. In the mid 2014, to fulfill the demand the Mobilio Honda had to stop the production of City so they can meet such a huge demand of Mobilio which costs low sales volume for city in recent times.

Maruti Ertiga is yet another MPV which has created buzz and high sales volume ever since its launch, selling over 5000 units a month. But lately it witnessed a bit drop in sales graph due to its simpler design which started to look dated. To boost the sales, Maruti has just launched the facelift version of Ertiga MPV with new design and smart Hybrid technology.

Today, we are going to compare all these three MPV’s to let you know which is of these is perfect for you extended family.

In this comparison between the three most promising cars of the segment Price will play an important role. Price of Xylo is between Rs.8.07-11.64 lakhs, initial price of Xylo is more than that of Mobilio and Ertiga but Top variant is less than Mobilio’s RS variant. Ertiga on the other hand is the most affordable of all, costs between Rs. 5.99-9.25 lakh while Mobilio is between Rs. 6.79-11.91 lakhs. So among all the three cars this section clearly belongs to Maruti Suzuki Ertiga with its price affordability. *All prices are of ex-showroom Delhi.

As far as engine is concerned Xylo takes away the cherry with its powerful engines than Ertiga and Mobilio at least on paper with its two diesel engines one is 2.5L CRDe engine that produces 93.5bhp power while 200Nm torque while 2.2Lmhawk engine produces more power and torque with 120bhp power and 280Nm torque.

Honda Mobilio on the other hand is available in both petrol and diesel engine with decent figures of 118bhp power and 145Nm for petrol in comparison to 93.7bhp power and 130Nm torque of Ertiga Petrol. Mobilio 1.5L diesel i-Dtec variant which feature in Amaze as well produces 98.3bhp power and 200Nm torque against Swift and Dzire inspired DDis diesel engine of Ertiga which produces less amount of power than Mobilio but same amount of Torque of 200 Nm. But the good thing is that, the diesel engine now features smart hybrid technology which not only bumps up the fuel efficiency but also refines the riding ability of the car.

Don’t just go on figures it might be misleading, under powered car might outperform the higher spec cars? Who knows! Well to arrive at the conclusion let’s see who is better among all in ride and handling department.

Mahindra Xylo who looks bulky and muscular in front of its compact sized rivals, but its body roll doesn’t cause much obstacle in its ride which is subtle at higher speeds with fine response at low speeds. As you crank up the engine it is smooth and linear feels like it is Eveready to push. New Xylo can move at all possible direction like a boat due to soft suspension which is improved a bit from the previous gen Xylo but not fully rectified. Xylo can cruise to three digit speed with ease can be called as Highway cruiser.

Honda Mobilio carries the same engine that features in Amaze sedan, ride and handling is far more linear than Ertiga. Mobilio’s main USP over Ertiga and Xylo is shifting through 1st and 2nd gear ratios during slow traffic. Gearbox is convenient to use with short gear throws, among petrol and diesel petrol transmission is better. Amaze was cursed for higher NVH levels so Honda has worked on it and reduced the NVH level to an acceptable range but when you cruising through three digit speed wind noise is excessive in the cabin.

Maruti Ertiga on the other hand has way better refinement level than Xylo and even Innova. Unlike Mobilio there is initial turbo lag there but you won’t feel unless it loaded with full capacity of 7 people which makes engine weak at low rpms. In mid range after crossing 1800 rpm it feels very peppy and refine. Ride and Handling is probably best among all nearly close to benchmark Innova.

Spaciousness is the foremost criteria in the MPV segment, rear seat space, comfort ability matters a lot to buyers.

Xylo is the tallest, widest and longest car among all with maximum amount of legroom and headroom space for passengers of all rows. 9 Seater Xylo has cushy, comfortable and supportive seats with ample amount of space and large boot space. Maruti Ertiga on the other hand gets complex space arrangement like Front seats gets maximum amount of space especially the driver side seat which is made for tall driver that automatically reduces the legroom space for 2nd row passengers with restricted width while 3rd rows seat are much higher than Mobilio but it is suited for 2 adults because it offers limited amount of legroom space. Honda Mobilio has advantage of better accessibility to third row seats unlike Ertiga and wide gap between the seats makes in and out a lot easier. Seats are supportive with good lateral support and big boot space of 223 liters is also better than of Ertiga.

Mahindra Xylo is a typical MPV with its muscular and rugged design which unfortunately lags behind the modern design of Mobilio and neat design of Ertiga. New Xylo looks moreover same like its old gen model with some minor tweaks. Front side looks best in terms of overall design and rear side looks unconventional.

With the launch of facelift, Maruti has tried to minimize the resemblance of Ritz on Ertiga by giving it two slate front grille with chrome treatment, revised bumper and fog lamps with chrome bezel. Side profile moreover remains same except for the new stylish alloy wheels while rear gets a thick chrome appliqué on the boot lid to adorn the rear side. Despite of the chrome garnish and revamped rear bumpers it still looks simple as compared to aggressive Honda Mobilio.

Honda Mobilio on the other hand is sporty and contemporary of the lot, front side is almost same like Brio and Amaze. Side profile gets two subtle creases with body colored door handles and ORVM’s while rear profile is the main USP of its overall design with Outlander looking taillights makes rear side better than other two cars.

Honda Mobilio gets a mix badge in this section as Brio based unconventional dashboard is a hit or miss for maximum, 4 lakh car owner can deal with this kind of dashboard but not a 10 lakh Mobilio owner. Apart from the unconventionality Mobilio also has some cost cutting in many areas like integrated head restraints, thin front seats etc. Mobilio is not all about quirkiness it’s about good quality as well like a premium three spoke steering wheel, beautiful faux wood design and user friendly infotainment system.

Maruti Ertiga gets the identical cabin but with different color combos and light and airy feel, in terms of quality it is superior them of all. Fabric upholstery looks nice but its light color can get dirty very easily but quality is supreme. Fit and finish is way ahead of Xylo and even Mobilio, adjustable steering wheel is light and chunky. Earlier Ertiga had the quality interiors but facelifted version now gets some nice features like it comes with a seven inch Smartplay infotainment system that supports GPS navigation, voice command and reverse parking display. Now, you have the option of folding down the third row seats in 50:50 ratio along with the 60:40 for the middle row. In terms of safety, Ertiga facelift comes with front airbag, ABS, (optional for LXi trim), seat belt pretensioners and force limiters as standard across all variants along with other optional features like reverser parking camera with display, EBD, rear parking sensors, brake assist, fog lamps etc.

It’s really hard to choose a clear winner as all the three are exceptional in almost every department like ride quality of all the cars is excellent, plus they offer good airy cabin. However, all of them come with some positive and negative points so let’s have a look at it