Home Versus Comparison of Maruti Ertiga VS Mahindra XUV500 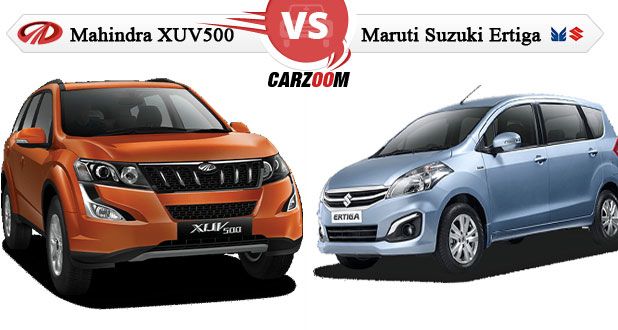 Mahindra’s XUV500 has already established itself as a dominating player in the SUV segment with great appreciation from automobile owners all over the world. The muscular SUV by Mahindra recently received its first facelift after four years and comes with 31 features which make XUV500 among the best options around. On the other hand, Maruti Ertiga is also enjoying the premium status in terms of reliability, good sales numbers and ticking over 4500 units a month since it’s evident in 2012. Maruti Ertiga comes with the practicality of size and mouth watering price range which makes it an unbeatable family car. The two vehicles bring an interesting proposition of which car really provides value for money in the long haul.

Maruti Suzuki has already established itself as India’s number one automobile manufacturer, not only in terms of revenue generation but also with respect to the number of vehicles sold. During the last fiscal they sold around 12 lakh vehicles in a single year. Its reputation of durable, long lasting and reliable cars has only been verified with the entry of Ertiga, Suzuki’s first utility vehicle.

Mahindra, on the other hand, has nine vehicles in the Indian market and with the introduction of updated XUV 500 being the newest addition to that group. Having already been tested in South Africa, Europe and Australia, it encompassed features that could only be high-end SUVs for a reasonable price.

With Maruti Suzuki’s Ertiga you have choice between two engines, the 1.4L K14B VVT petrol engine and the 1.3L DDis diesel engine. The VVT gives you decent performance with the power of 93.7bhp at 6000rpm and toque of 130Nm at 4000rpm, where as its diesel counterpart shells out 88.8bhp at 4000rpm with a torque going up to 200Nm at 1750rpm. The diesel now equipped with SHVS smart hybrid technology comprises of start/stop function, brake energy regeneration and torque assist function.

If you’re looking for something basic that will ride you through the day, then the Ertiga is more than enough if you truly want to taste power than Mahindra XUV500 is the obvious choice. It’s one of a kind 2.2 liter mhawk diesel engine that thrives at 140bhp at 3750rpm with the maximum torque of 330Nm at 1600-2800rpm. It takes merely 10 seconds for the 5th generation Variable Geometry Turbocharger to take the XUV 500 from 0 to 100kmph with the top speed of 175 km/hr. Despite its exuberant power, the XUV500 is for the economical driver as well delivering 16 Kmpl of mileage with the integration of Micro Hybrid Technology.

The Ertiga and XUV500 both comes with seating capacity for 7 people but as far legroom and shoulder space is concerned XUV500 outscores Ertiga in first and 2nd row bench while 3rd row of both the cars are best suited for kids or short adults. Despite of lesser length Maruti Ertiga offers more boot space than XUV500, luggage space with 3rd row seat up is 135 liters as compared to 93 liters of its counterpart.

The XUV500 is definitely the more menacing looking car when compared to more subtle Ertiga. Inspired by cheetah styling, it’s front grille bears similarity to the animal’s jaw, the car’s body line are in sync with that of a pouncing cheetah and the door handles resemble paws. The Ertiga on the other hand, though powerful and bold, looks a little sumptuous when you power on the front of the car. The Cheetah inspired styling is further enhanced by new projector headlamps with S shaped LED lights, new front grille like new GEN Scorpio, L shaped Fog lamps and new muscular bonnet.

Maruti Ertiga receives the facelift and looks sporty from the front with chrome treatment in the form of dual slat grille and around the fog lamps. Maruti has also tweaked the bonnet of Ertiga which now possess downward slope with creases and it goes well the design of the MPV. Side remains same except for the new alloy wheels while rear gets a thick chrome appliqué and revised bumpers to make it stylish than ever. Overall, Ertiga has improved a bit but as compared to new age XUV500, it’s too simple to match the elegance of stylish and trendy MPV.

The Mahindra trumps Maruti when the car’s interiors are taken into consideration as well. The Maruti has lots of spaces for storage, a basic music system and a sporty dashboard. Meanwhile, the new XUV 500′s state of the art entertainment modifications are spectacular. For starters, there’s an extremely high-end touch screen infotainment system synced with a seven-inch LCD, DVD player, MP3 space, i-pod connectivity and VMS (voice messaging system). It’s meant for those who can appreciate great technology and wants to enjoy the perfect beats when going on a long drive.

The XUV500 has automatic air conditioning to save fuel and power without you having to worry about whether the temperature in the car is correct. The Ertiga’s put in a separate air conditioning valve for the 3rd row so that the rear of car doesn’t get neglected in the cooling process, which is something the XUV 500 has as well along with cabin temperature control. Though Maruti Ertiga now receives a 7 inch Smartplay infotainment system with voice command, GPS navigation and reverse parking camera display along with multimedia support.

The XUV500 consists of other high-end features like intellipark reverse park assist system, electric sunroof, mobile charging point, a fully loaded GPS system, and a driver information system that tells you everything you need to know from fuel quantity to air pressure.

Both cars consists of the McPherson struts bus the Mahindra’s put in independent multi-link suspension in the rear making surfing through difficult terrain seamless while Maruti went with the Torsion beams giving higher mounting rigidity.

The all wheel drive and interactive torque management system puts the XUV500 over the top yet again being able to tackle the toughest of terrains and distributing the torque between the front and rear of the car. The XUV500 and Ertiga both have disc breaks in the front and while the later prefer drum brakes in the rear.

Overall, the XUV500 is definitely the car to go for if you’re ready to invest a little more but it’s definitely worth the extra money. The new XUV500 looks more convincing than before with long features, redesigned styling and improved efficiency. The Maruti Ertiga is a proper blend of act; practicality and size that comes in alluring price tag which is further become tempting with the inclusion of an automatic gearbox and diesel hybrid technology. It is a complete family car that is hard to beat while XUV500 is a pure SUV which now comes with long list of features and eye soothing exterior.