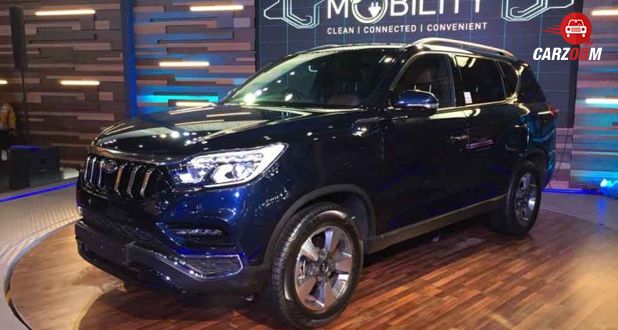 Finally, the launch date of the all new Mahindra XUV700 luxury SUV car has been revealed. The car will be launched on 9th October 2018. The car was code named as Y400  and  is a rebadged model of the Ssangyong Rexton G4. Though Mahindra is  yet to finalize the name of the SUV, but XUV700 has been stuck in the market ever since it was announced.

The SUV will clearly rival with Toyota Fortuner, Ford Endeavour, Isuzu MU-X, and the Mitsubishi Pajero Sport. If we consider this fact then Mahindra will price the XUV700 competitively, because it needs a good proposal to distinguish itself from its recognized competitors. In other words, we expect the price of the car to be less than Fortuner and Endeavour.

In order to keep the prices low, the carmaker is said to have localized many parts of the SUV, which will assemble at the automaker’s Chakan factory through the completely knocked down kit route. While the price will be less still the SUV will be comparable to its rival in terms of size, engine, and features.

Most likely the XUV700 will be powered by a 2.2 liters 4 cylinder turbocharged diesel engine with 187 Bhp-420 Nm outputs. Also, it might get a 7-speed torque converter automatic gearbox sourced from Mercedes Benz.

The XUV700 is expected to be a soft-roader than the other SUVs in the same segment, it will have rear-wheel drive and four-wheel drive layouts. In the seating, it will come with seven leather seats. The car will be one of the largest SUVs in its class with 4859 mm length, 1960 mm width, 825 mm height and a wheelbase of 2700mm dimensions.

In the features the SUV car might get projector headlamps, a 9.2-inch touchscreen infotainment display with Android Auto and Apple CarPlay, a 7.0 inch LCD instrument cluster, cooled and powered front seats, a parking camera, and a smart tailgate.