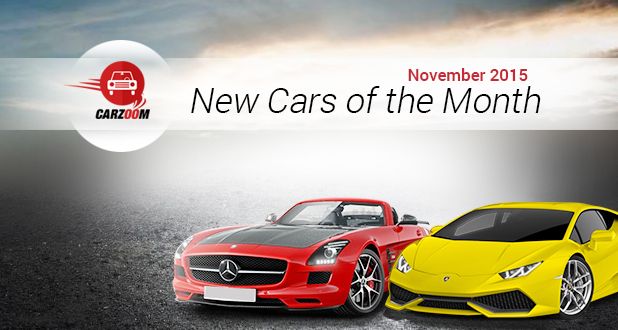 The festive season gifted a lot of new hearthrobing cars to the auto fanatics. This list is to serve all those car lovers who were too busy to update themselves in the hustle and bustle of festivities. In line with current market status of automobile industry, we are bringing forth the trendy new cars of the season.

In the end of November, Mahindra has launched the automatic variant of the XUV 5OO. The vehicle comes on road with Scorpio’s 6-speed automatic unit which is available in W8, W10 and W10 AWD variants of the Mahindra XUV 5OO. Technically, it is powered by a 2.2-liter mHawk diesel motor generating 140 bhp and 330 Nm of peak torque. The automatic transmission is the 6 speed unit from Scorpio at the same time the standard manual is also a 6-speed unit. Speaking of the prices, the auto variants are priced at Rs. 15.36 lakhs (Ex-showroom, Navi Mumbai). It comes in diesel variant only.

The flagship supercar of the German automobile giant Mercedes, AMG GT S has been launched in mid November for INR 2.4 Crores (Ex-Showroom Delhi). This two seater super car can catch a speed from 0-100 kmph in just 3.8 seconds and can achieve a whooping top speed of 310 kmph. Swapping the greatly successful SLS AMG, this powerhouse produces 510 PS of power with 650 NM of torque. This 3982 cc flying machine comes in petrol variant.

Lamborghini has launched the all new Huracan LP 580-2 and LP 610 4 super car in India at a price tag of INR 3.00 crores and 3.04 crores respectively. The car discards the AWD system in favor of a tail happy RWD configuration. The variant came with a revised suspension, which includes a reconfigured spring setup and anti-roll bars. The Huracan is also comprises of Lamborghini Piattforma Inerziale (LPI), which is a measurement unit that measures the car’s pitch, yaw and roll. Both variants are equipped with satellite anti theft system.

The Range Rover Evoque has been unveiled for INR 47.1 lakhs in India today. The Evoque has got mesmerizing aesthetics inside as well as on outside. It features the redesigned bumper, newly styled grille, larger air-intakes and LED adaptive head lamps make it an alluring gift for all the SUV lovers. LED tail-lamps, new tailgate spoiler and new set of alloys provide the car a modish look. The British automobile manufacturer already started bookings for the car in the month of October and has received an encouraging response from the customers.

The Grand i10 was launched in September 2013 and has been a grand success with near about 1.1 lakhs units sold in India. In November, the Hyundai launched CNG version of the car which is also well accepted by the consumers. The price of CNG model ranges between INR 5.4 lakhs to INR 6.6 lakhs. On the other hand, the LPG model is priced at INR 5.3 lakhs.

Just like i10 Grand, the Hyundai launched CNG versions of Accent too. It is comprises of the same features as its petrol and diesel variants. Moreover, it is priced at INR 5.4 lakhs to INR 7.6 lakhs.

Maruti WagonR has been launched for INR 4.76 lakhs (Ex-showroom, New Delhi). Previously, the car was scouted with an AMT (Automated Manual Transmission) gearbox. The company is preparing more AMT-based option with their budget cars. Before that, the company launched a limited edition model of the WagonR called the WagonR Avance. In upcoming variant, the exteriors shall get new body graphics, rear spoiler along with keyless entry, roof-rails in gunmetal color and central locking/security alarm. The Maruti Wagon R comes in both Petrol and diesel variants in budget prices ranging between INR 4.1 lakhs to INR 5.1 lakhs.

The Wagon R was recently seen having an Auto-Gear-Shift badge. The car is largely same as the current car apart from the automatic transmission lever inside and the Auto Gear Shift badge on the tailgate. The modification also includes optional ABS and driver and passenger airbag. It is priced between INR 4.3 lakhs – INR 5.3 lakhs.