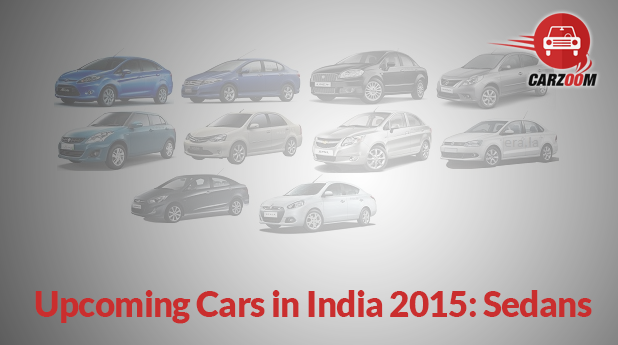 2014 saw a revolution in sedan segment with cars like new Honda city, Hyundai Xcent, Maruti Ciaz, new Toyota Corolla Altis and Audi A3. 2015 is not going to be different as well with many car makers will launch new sedans in the year. We earlier told you about the upcoming SUVs and MPVs for 2015 and it’s time to see the sedans slated for 2015.

1. Mercedes Benz CLA Class– Mercedes is no longer the dominating luxury car maker in India, in fact it is at the last spot among the trio of Audi and BMW. Despite of wide range of products being launched by Mercedes it managed to only sell around 7700 units in India against Audi’s 10,000+ units. In order to regain the top spot again Mercedes will start 2015 with its CLA sedan which is a less powerful version of CLA45 AMG launched in July 2014 and CLA sedan is based on MFA (Modular front-wheel architecture).

CLA will be powered by the similar engine of A and B class with the option of Petrol and diesel engines. It shares exterior design cues from A-class while CLA sedan gets interiors like A-class hatchback. It will lock its horns against Audi A3 sedan when launched.

2. Maruti Suzuki Dzire facelift– India’s hottest hatchback Swift has been updated recently and now it’s time for its sedan brother Swift Dzire to have the same. In new Swift hatchback it was hard to find any exterior changes but this will not be the case in Dzire facelift as it will have many cosmetic changes like new bumper, redesigned front grille, bezel fog lamps etc. Apart from cosmetic changes new Dzire will get some new add-ons in the cabin like Push start button, new A/C vents, faux leather seats, climate control, new audio system with bluetooth, AUX-in, USB support, reverse parking sensors, keyless entry and many more features.

Engines will be retained by Maruti i.e. 1.2L K series petrol engine producing 83Bhp power and 115Nm torque and 1.3L DDis diesel engine giving 74bhp power and 190Nm torque. Fuel efficiency will see an improvement by 10% like Swift hatchback. Price will remain same but the price of top variants might see hike due to some new features.

3. Ford Figo concept sedan/Ford Figo+: Ford’s new concept which was showcased at the 2014 auto expo is all set to make its way to the Indian roads in the form of Figo compact sedan which will take on Honda Amaze, Swift Dzire and Tata Zest. Ford new concept is based on Ford’s ‘One Ford’ and kinetic 2.0 philosophies. It looks very attractive form all the angles when showcased at the auto expo with new bold front grille; headlamps etc and interiors might be the blend of Ford Fiesta and Eco Sport.

Ford Figo+ expected to be equipped by Fiesta inspired 1.5L TDCI engine which is god to produce 89bhp power and 205Nm torque plus it will get 1.0L EcoBoost petrol engine. Both the engines are expected to give higher fuel efficiency with many new features. We expect that Ford to price it competitively as there are many fierce competitors already available in the compact sedan segment.

4. Hyundai Verna Facelift: Hyundai had a great and successful 2014 as the company marked 21.6% market share highest in 16 year history of the company in India and sold over 4 lakh units thanks to the great performances by Elite i20, Grand i10, Hyundai Verna, Xcent etc. Hyundai is planning to kick start the 2015 with number of launches one of them will be Hyundai Verna which received a set back from Honda City which removed it from the top position in the sedan segment.

New Verna has been spotted many times and by the looks it new Verna will be getting a new front fascia with swept back projector headlamps with daytime running lights, new twin slate front grille, LED tail lamps, revised fog lamps etc. On engine front it will continue to get power from 1.4L diesel and petrol engine and 1.6L petrol and diesel but New Verna might get new 6 speed automatic gearbox replacing 4 AT. Changes are also expected in the cabin but not many except a seven inch touchscreen infotainment system and some minor add-ons. Safety wise new Verna will be more feature rich than the current model.

5. New Honda Accord: Honda’s lone car in premium sedan segment in India Accord which was discontinued in 2013 will make a comeback in 2015 in a new form. New Accord will be more feature rich, better styling cues and more spacious cabin than ever before. New Accord will be available in 2.4L petrol engine with the options of both manual and CVT transmissions. This around there will be no high performance V6 engine but Honda might introduce a Hybrid variant with it and diesel variant later. We just hope Honda will price it rightly in order to boost more sales.

6. Volkswagen Jetta facelift: The German car manufacture Volkswagen is gearing up for the launch of the facelifted version of its luxurious offering Jetta which was recently spotted without any camouflage. Jetta is a successful car of the company which somehow dented the sales of its chief rival Skoda Octavia. New Jetta features quite a few cosmetic changes like Bi-xenon headlights with LED daytime running lights, revised front bumper with wider air dam, new fog lamps, refreshed rear bumper with boot lid and LED tail lights.

On the inside it expected to get many new features like advanced infotainment system, new flat-bottom steering wheel, revised instrument cluster with large gauges, piano black finish etc. As far as power-trains are concerned new Jetta is expected to get same 1.4L petrol and 2.0L TDI diesel engines but the diesel trim could get the 10bhp hike in power.

7.  Mahindra Verito electric: India’s leading SUV maker Mahindra’s sedan attempt Verito and Verito Vibe was a complete disaster for them as it failed to generate good sales figures for the company. But it seems Mahindra is not a mood to give up yet as M&M is planning a electric Version of Verito which is scheduled to launch in the mid of 2015. Interiors, exterior and dimensions will remain same like standard Verito but power train is going to be different. Verito electric will get 29KW AC motor with 15A 230V socket and LI-on 72V battery which takes 7 hours to charge fully and 1 hour for fast charging. After full charge it can go 100 km with the top speed of 85km/hr and company is expecting to sell around 100 units a month.

8.  New Volkswagen Passat: New Passat will be the second launch in India by Volkswagen in 2015. It will be in completely new design based VW’s new modern approach which features new LED headlights- tail lamps, subtle creases etc. Apart from new design new Passat will have 79mm longer wheelbase which ensure great spacious cabin for the occupants. Cabin will be equipped with some luxurious features like premium upholstery, VW’s latest in-car entertainment system etc. New Passat will packed with long list of advanced safety features including raft of airbags etc.

9. Tata Kite compact Sedan: Tata launched Zest in 2014 which getting decent sales figures for the home grown car maker thanks to an AMT gearbox and HORIZONEXT design cues. Tata is gearing up for the launch of Tata bolt which is launching on 20th January 2015 but after that launch Tata is working on a Kite duo that includes a sedan and a hatchback. Tata kite sedan will get the same engines of Zest- 1.2L Revotron petrol and 1.4L turbocharged intercool diesel engines plus it will also comes with new 1.05L 3 cylinder diesel engine Tata Manza Hybrid. Tata could offer 5 speed manual and an AMT gearbox as well in new Kite sedan. According to the spied images design of Kite sedan will completely different from the ongoing Tata cars. It will compete with Honda Amaze, Hyundai Xcent and Maruti Swift Dzire when launched.