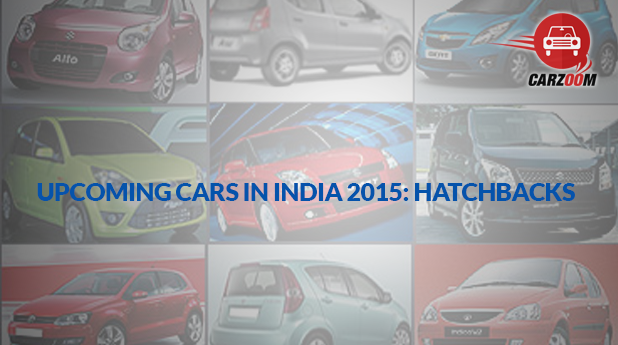 2014 was a great year for car enthusiast and 2015 is not going to be different as there are number of launches lined up for this year. In our earlier articles we already told you about the upcoming SUV, MPVs and sedans and now it’s time to go through the hatchback segment. Hatchback segment is one of the largest and the most competitive segment in the industry and 2015 will see some of the auto giants like Tata, Maruti and Fiat etc to be the part of this most competitive segment. Let’s go through to find out the upcoming hatchbacks for 2015 in detail.

1. Tata Bolt: First launch of the year in this segment will be by home grown manufacture Tata which is based on company’s new HORIOZNEXT technology. In 2014 Tata has launched the Zest sedan which is based on same technology. Tata bolt will take on Maruti Suzuki Swift, Hyundai Grand i10 and Ford Figo. Tata bolt will be replacing Vista and it features Harmon touchscreen system with bluetooth connectivity, navigation system, Projector headlamps etc. Bolt gets 1.2L Revotron turbocharged MPFi petrol engine of Zest with multi driving modes and 1.3L fiat sourced Multijet diesel engine.

2. Tata Nano Twist active AMT:  Tata motors has been updating Nano in patches rather than giving it a full fledge facelift, in recent times Nano updated with latest interiors and power steering. But the biggest update is yet to come in the form AMT gearbox, yes you heard it right, Nano to have an AMT gearbox just similar unit to one in Zest. Inclusion of AMT will surely make Nano more expensive than the standard variant on the other hand despite of increased price it might become the most affordable AMT car in the world by dethroning new Alto K10. There are also chances that Nano AMT might be powered to a new 3 cylinder petrol engine developing 67bhp power with minutely improved fuel efficiency.

3.  Datsun Redi GO: Datsun Redi Go will be the third offering by the Japanese carmaker after Go hatchback and upcoming Go+ MPV. Datsun will position Redi go above the Go hatchback and will be priced 2.5-3.5 lakh to take on Maruti Alto and Hyundai EON. Redi Go will be powered by the same 1.2L Petrol motor which makes 67bhp power and 104Nm torque paired to a five speed manual transmission. Apart from petrol motor Redi Go might get a CNG and LPG variants as well.

4.  Maruti Suzuki Wagon R Stingray AMT– After the success of Celerio AMT and New Alto K10, Maruti Suzuki is silently working on AMT version of its most successful car Wagon R Stingray. Main advantage of AMT gearbox is that the clutch need not to be pressed frequently which makes driving stress free and it improves fuel efficiency as well. Wagon R AMT to retain same all aluminum 3 cylinder engine that produces 67.1bhp power and 90Nm of peak torque with 5 speed manual transmission along with 5 speed AMT. Though price of AMT will be around 30,000-35,000 more than the manual variant.

5. New Honda Jazz: Honda had a fantastic 2014 registering 67% growth rate and 163% growth in December 2014. Honda wants to carry forward that momentum in 2015 by number of launches and first among them will be the premium hatchback ‘Jazz’. Honda discontinued it in 2013 due to out of market price which leads to no demand of Jazz at that time. Honda is now gearing up for the re-launch of Jazz hatchback hopefully with sensible price strategy. New jazz will 1.2L i-Vtec petrol and 1.5L i-Dtec diesel engines with improved fuel efficiency. There are rumors that new Jazz might be equipped with first in class paddle shifters and many more new features as well.

6. Maruti Suzuki YRA hatchback: Among all car manufactures Maruti Suzuki has the widest range of products in almost all the segments except in premium hatchback section. But in 2015 India’s largest car manufacture will launch a premium hatchback codenamed YRA which will take on Hyundai Elite i20. Maruti will put YRA hatchback between Swift and Ciaz. YBA looks a fusion of Kizashi sedan and Swift hatchback with host of features like Swept back headlamps, U shaped grille like Kizashi, LED tail lights, smart play touchscreen infotainment system, ambient lighting etc. YBA hatchback to be offered in 1.4L petrol and 1.3L Multijet diesel engines with 5 speed manual gearbox as standard and a optional AT gearbox.

7. Tata Kite hatchback: Tata to add new member in their line up in the form new compact hatchback codenamed ’Kite’ which will be locking its horns with Maruti YBA hatchback. Kite hatchback will be based on Indica Vista platform but with refined NVH level and reduced weight. Tata kit will carry all new 1.05L 3 cylinder diesel engine of Manza hybrid and 1.2L Revotron petrol and 1.4L intercool diesel engine.