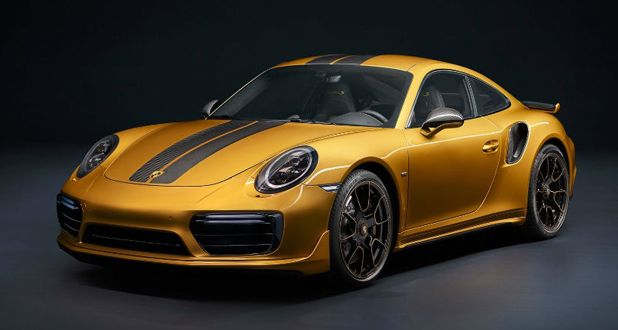 Porsche has revealed a new limited edition 911 which happens to be the most powerful 911 Turbo S ever available in golden paint shades. If you don’t like the golden color shade, need not to worry as it is also available in other paint schemes. In international markets, Porsche 911 has a total of more than 20 variants while in India it is only available in 9 variants. Badged as 911 Turbo S executive series, the special edition will be limited to 500 units only.

Besides, the limited special series comes with sporty racy stripes and delivers 27bhp more than the standard model. The sedan gets its power from the same 3.8l twin turbo six cylinder engine that makes 607PS power and 750Nm of torque. The car can naught 0-100 km/hr in just 2.9 seconds while 200km/hr in just 9.6 seconds. It can hit a top speed of 330km/hr. Powering all four wheels is a seven speed automatic gearbox.