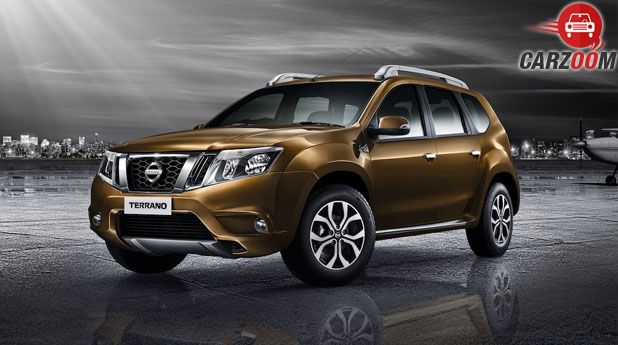 In a bid to revive the sales, Nissan India is planning a facelift version of Terrano which could be launched in March 2017. Going by the recent speculations, the facelift is likely to get minor design changes along with some added features.  The SUV has been on sale since 2013 but never received any sort of updates. Recently, it got some subtle changes when Nissan launched 6-speed AMT gearbox with the diesel engine.

The 2017 Terrano will be featuring a redesigned front fascia including revised headlamps, revamped front grille and bumpers with more chrome embellishments. The side profile likely to be same except for the new alloy wheel design while rear bumper too will be getting minor tweaks.

Interiors won’t receive any subtle changes either; it might get new upholstery, new cabin color and addition of new materials. Prices are also likely to remain similar to the current version. Being just a cosmetic facelift, things under the hood will remain same; the facelift version will continue to draw power from the same engines.

Nissan Terrano competes with Hyundai Creta and Renault duster in the Indian market. The SUV has been losing out to its cousin as Duster is better equipped, has fresher design and affordable price range. Besides Terrano facelift, Nissan will also launch X-Trail Hybrid SUV during the 2nd Quarter of this year.

Showcased at 2016 Auto Expo, X-Trail SUV packs with a 2.0-litre gasoline-electric hybrid powertrain which belts out 143 BHP and 200 Nm of torque. India will be the fourth market after Japan, Thailand and Indonesia to get this Hybrid SUV.