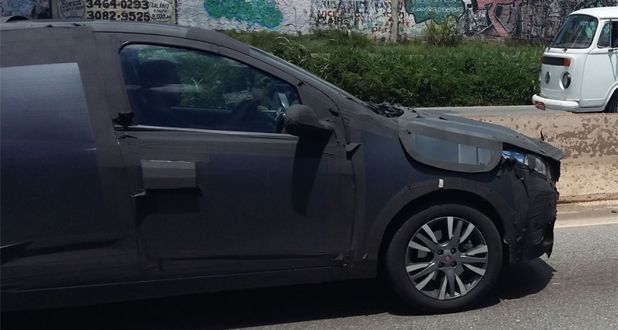 Fiat Punto Evo- a solidly build, excellent handler and carries a timeless design but its sales numbers are not justifying its potent abilities and way too low to even disturb the competition. Punto has been here for a decade now and received its full fledge facelift last year; but its refresh version fail to register 4 digit units a month.

However it’s now right time for Fiat to consider a refresh version of the hatch. And, it seems Fiat is pretty close to place the Next Gen Punto in production. A test mule of new Gen Punto has been spied in Brazil with full camouflage. Codenamed as X6H, The prototype look more like the new Palio than that of the Punto, but suggests that it is certainly the replacement of new Punto.

Besides new Design and features, the biggest USP of the new model would be the longer wheelbase ensuring better cabin space especially at rear. The test mule was heavily covered but from what we can see it gets sweptback headlamps with chrome and black finish, new dual tone alloy wheels; rear wiper with washer roof mounted antenna and X shaped LED tail lamps looks impressive.

Expected to be launched in second half of 2016 in Brazil, European countries and Latin America and will replace Punto in Brazil and as Linea’s successor in Turkey. Fiat might launch the new generation Punto in India by the end of 2016 or early 2017.

There is no clarity about the power trains of 2016 Punto but it is rumored that it will have three engine options- all aluminum 1.4L GSE (Global small engine) petrol developing 100hp and 140Nm of torque along with 1.6 litre and 1.8l E-Torq engines.