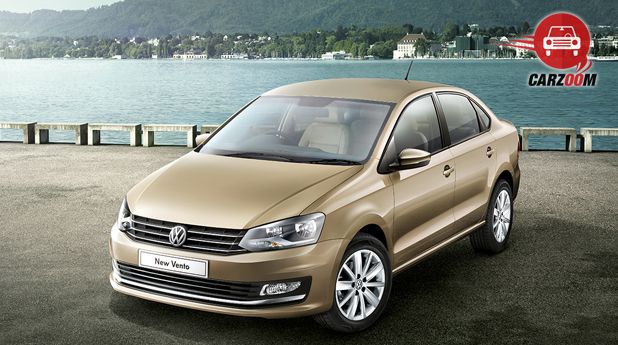 Not a long ago, Volkswagen launched Vento sedan with automatic gearbox and minor tweaks, now, The German car maker has launched Vento facelift in India with prices starting from Rs. 7.85 lakh. This is the second update to the Vento within 12 months, which has been a slow seller and losing its market share against competitors. The new Vento gets a few comprehensive styling updates along with some added features and improved fuel efficiency. Let’s see what new Vento has in store for us.

The diesel variants are powered by a 1.5L TDI engine which was introduced last year which is rated to generate 103.5bhp [email protected] of peak torque and 250Nm of maximum torque. The engine coupled to a 5-speed manual and a 7-speed DSG AT gearbox.

Volkswagen has tuned all three engines in order to better the fuel efficiency and as a result of it, manual petrol variants are now 7% more fuel efficient, 2% and 1% more frugal on the diesel manual and automatic variants.

The new Vento is now 6mm longer and 1mm taller than the 2014 model and it also offers 8 liters of more boot space (494 liters). The ground clearance has gone down by 2mm to 163mm from 165mm. The new Vento now measures at 4390mm in length, 1699mm in width and 1467mm of height along with the wheelbase of 2553mm. It will be interesting to see if these minor changes in dimensions would help in improving the cabin space or not.

The side profile remains unaltered except for the new alloy wheels, chrome touch on door handles and electrically foldable ORVMs with LED indicators. At rear, there is new bumper, revamped boot lid, exhaust pipe and new Tail lights with 3D effects and a soft touch release button for the boot lid.

On the Inside, the cabin boasts a new color theme; highline variant gets a walnut beige theme while Trendline and Comfortline variants get a Cloud Titanschwarz interior theme. Apart from the regular features, new Vento is equipped with some new features such as new Sporty flat bottom steering wheel, cruise control, cooled glove box, power folded ORVMs, silver surround on central console, revised instrument cluster and a dead pedal.

With all these minor updates, New Vento certainly looks a good prospect against the competition but the only area of concern is the after sales and the service cost. In the coming months, the company will launch the compact sedan which might prove to be a game changer for the car make in India.