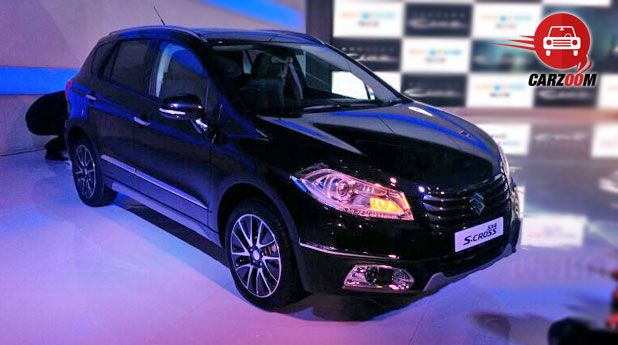 Much has been spoken about Maruti Suzuki S-cross till date regarding its engine, price, design and more. Well, today we are going to tell you about all the stuff related to Maruti’s debutant crossover in the country. Recently, Maruti Suzuki revealed the S-cross at 2015 IIFA awards in Kuala Lumpur, Malaysia and will launch it in Indian market in the first or second week of July 2015. According to a report, bookings for the vehicle has commenced for a token amount of Rs. 25,000, however, Maruti has not confirmed it officially. The website of S-cross is now live and it hints towards equipping with a single best-in class engine.

Talking about the exterior styling, the Indian version of Maruti Suzuki S-cross would be different from its international counterpart. Indian-spec will be getting twin-slat front grille with chrome finish, projector headlamps with LED daytime running lights for the top variants and clear lens halogen unit for the base variants. In addition, there will be many elements which help it to give more crossover look with features such as faux skid plates at front and rear, full body black cladding and roof rails.

There will wraparound taillights at rear with no Maruti or Suzuki Badge, the car will have S-cross and engine badging only.

Much of the speculations and talks regarding S-cross is its engine, especially when it comes to diesel engine as petrol will not be the part of the launch. Though, petrol engine will be offered, it will be the Ciaz powered 1.4L K-series engine. Now, let’s talk about the diesel engine, earlier there were rumors that the Crossover will come with two diesel engine option-1.3L and 1.6L Multijet engines. But, according to its website, S-cross is likely to be powered by a 1.6L Multijet diesel engine that makes 120PS of max power and 320Nm of peak torque, mated to a 6-speed manual transmission.

Earlier reports stated that, Maruti is looking to equip S-cross with an automatic gearbox and AWD all grip features, though there is no official confirmation yet.

In terms of safety, it will be getting two airbags, ABS, EBD, all disc brakes, reverse parking camera with display assistance and many more.

The upcoming Maruti Suzuki S-cross boasts the seating for five persons and it will be a sub 4m vehicle. The S-cross measures at 4300mm in length, 1765mm in width and height of 1580mm. The vehicle has a wheelbase of 2600mm and it carries the cargo capacity of 430 liters which can be increased up to 1269 liters by folding the rear bench.

The Maruti Suzuki S-cross is likely to be priced in the bracket of Rs. 8-12 lakh (ex-showroom) which looks decent and it will give stiff competition to well establish cars like Renault Duster, Hyundai Creta and Nissan Terrano. The S-Cross is a premium Crossover and hence, it will be sold at Maruti’s Nixa showrooms which are being set up especially for company’s premium offerings.