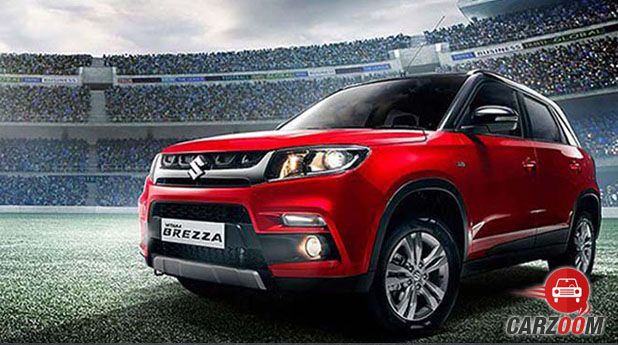 Maruti Suzuki, one of the apex auto makers in the country might be late to the party when it comes to entering the volume fetcher compact SUV segment. But it’s better to be late than never and Maruti ended up delivering a piece of sheer greatness in the form of Vitara Brezza. Maruti first brought the vehicle at the 13th edition of Indian Auto Expo and it emerged as a show stopper which was later launched in India.

The MSIL priced compact SUV extremely competitive, flaunts desirably fresh design, tempting interior and the high riding position that appeals everyone and helped to become stellar of a package. The compact SUV entered into the top 10 cars of the month within months of its launch and delivering phenomenal numbers since then.

The competition wasn’t easy as other cars in the race were Hyundai Tucson, Ford new Endeavour, Tata Tiago, Hyundai Elantra, Toyota Innova Crysta and Toyota Fortuner. The foremost eligibility criterion was design, features, performance, safety, fuel economy, and value for money. It was Hyundai that won ICOTY for three years on the trot, Creta in 2016, Hyundai Elite i20 in 2015 and Grand i10 in 2014. The Brezza has been retailing 9000 units monthly with a phenomenal growth of 138 percent in April-October period. Till November 2016, bookings have crossed 1.8 lakh bookings mark and so far around 80,000 units have been retailed. Such high demand has proportionally boosted the waiting period to seven to ten months. Maruti has also launched iCreate customization kits for Vitara Brezza.

Handsomely priced between Rs. 7.19 and Rs. 9.88 lakh, Vitara Brezza is available in three trim levels- LDi, VDi and Zdi. It is powered by a familiar 1.3-litre DDIs diesel engine that develops 89bhp power and 200Nm of torque, mated to a 5-speed manual gearbox. The carmaker will launch petrol variants of the compact SUV by April 2017.