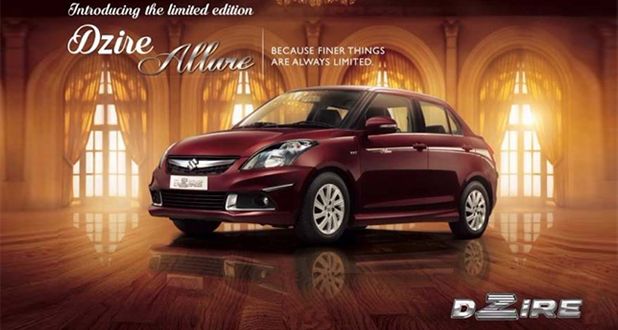 Offering buyers with something premium and unique, Indian arm of Maruti Suzuki has launched a special edition of its bestselling compact sedan Swift Dzire. Christened as Maruti Swift Dzire Allure, it gets range of exclusive exterior and interior enhancements and goodies. The company hasn’t revealed any prices yet, but we expect it to be offered as accessory kits at company’s dealerships.

No mechanical modifications has been done with the limited edition, it extracts power from a 1.2l VVT petrol engine that makes 84bhp power and 114Nm of torque while 1.3L DDis diesel engine deliveries 74bhp and 190Nm. Transmission options include 5-speed manual as standard while diesel is also available with a 5-speed AMT gearbox. The petrol derivative is good for 20.85 Kmpl while diesel delivers 26.59 Kmpl of ARAI rated mileage.

Maruti Suzuki will launch Baleno RS next month, followed by Ciaz and S-Cross facelift. In April, Vitara Brezza petrol will be launched and then expect new Gen Swift Dzire with all new design and features. The 2017 Swift will make its way to Indian market during the October-November period.