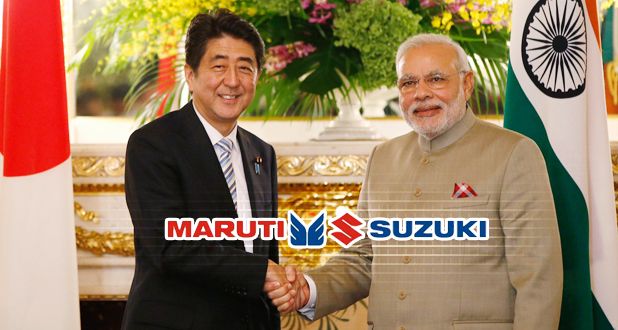 Besides signing agreements and deals on civil nuclear cooperation, famed bullet train on Ahmadabad-Mumbai Corridor and defense technologies, India-Japan Business Leaders forum witnessed something more special when our honorable Prime minister announced the export of Made in India cars to Japan that will be manufactured by Japanese powered Maruti Suzuki India limited.  In a historic move, as a part of Make in India initiative for the first time ever Japan will import the cars from India.

At the India-Japan Business Leaders Forum, Prime Minister Narendra Modi has revealed that from January 2016, Suzuki will import Made in India cars.  If things go well and good then the India bound Baleno hatchback will be the first car to be exported to Japan with operations hope to commence from next month.

Baleno is probably the right product to be exported as it is without a doubt the most premium product from the Maruti Stable. Also, it is the only car in the line up to get dual front airbags, ABS as standard across all variants.

Maruti Suzuki chairman R C Bhargava said that exporting automobiles to Japan is not an easy task. He added that we expect to export 20,000-30,000 units a year. Maruti Suzuki India is a subsidiary of Japan’s Suzuki Motor Corp., with the parent company owning 56% in the Indian subsidiary.

Established in 1983, MSIL has certainly come a very long way to become number carmaker in the country with the annual sales surpassing 1.2 million units. Maruti Suzuki has strong hold in the domestic market and now they want to strengthen their root on the global front as well with this initiative. Maruti is targeting 2 million units a year milestone by 2020 and this move certainly a step ahead to achieve the feat.