Home News and Stories Just In: 2018 Datsun GO and GO+ Plus facelift launched 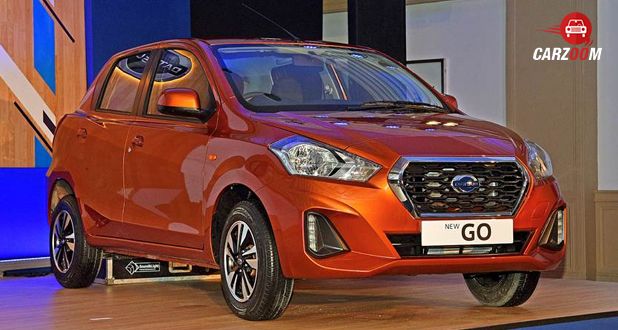 Datsun has launched its GO hatchback as well as GO+ in India. The cars got decent upgrades inside as well as outside. Both the cars are available in five variant choices earlier there were four choices each. Take a look at the detailed features Datsun GO and GO+ Plus facelift comes with:

Both the cars got updated bumpers that are fitted with LED daytime running lamps. They get larger 14-inch diamond cut alloy wheels with 165/70-section tyres that replaces the 13-inch 155/70 steel wheels on the top-spec variants. Both the cars have slightly redesigned dashboards with the front seats getting conventional setup in place of the connected layout. Both the vehicles have floor-mounted handbrake instead of the pull-type lever offered before. There is also a 7-inch touchscreen infotainment system, apple carplay as well as android auto connectivity.

Under the hood there is a 1.2-litre, 3-cylinder petrol engine that produces 68PS and 104Nm of torque. The transmission still remains a 5-speed manual gearbox like earlier for both vehicles.

There is Amber Orange for the GO and Sunset Brown for the GO+ car.

The Datsun Go will compete against Maruti Suzuki Celerio and Wagon R. The Datsun GO+ presently has no competitors in the market as is the most affordable seven-seater right now.