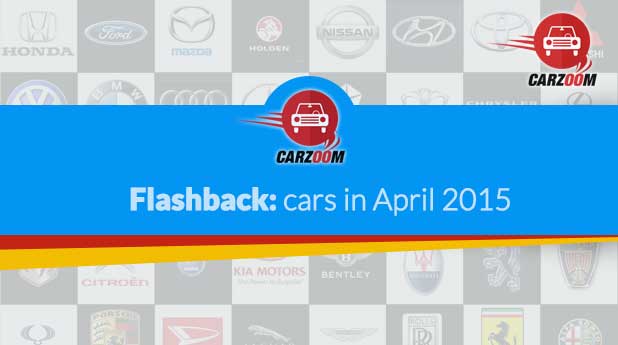 The Indian car industry has become very competitive and innovative in the last few years; the car makers who are known for making conventional products are entering into new segments now like Hyundai entered into Crossover segment with i20 Active in March 2015, Renault in MPV segment. Last month’s biggest attention seeker was Renault because the car maker has launched its first ever MPV in India ‘Lodgy’ and will unveil the small XBA/Kayou hatchback in India on 20th May 2015. In the month of April Indian automotive industry witnessed the launch of facelifted versions than new cars launches like new variants of Honda City, updated Hyundai Elantra and facelifted Toyota Carry. Apart from launches some cars will be phased out soon like Tata Vista, Manza, Tata Sumo Grande/Movus, Ford Figo, Ford Classic and Maruti Suzuki Ritz.

Renault India in order to expand its line and increase market share in India has introduced Lodgy MPV in the country. Lodgy is available in seven variants between the price domain of Rs. 8.19-11.79 lakh (ex-showroom Delhi). Lodgy is packed with tried and tested 1.5L K9K same engines of Duster and aims to deliver performance of the sedan and practicality of MPV. Lodgy has the longest wheelbase as compared to Mobilio, Ertiga and segment leader Innova that makes it one of the spacious MPV. Lodgy is packed with features like 7” touchscreen infotainment system with rear view camera assistance and Navigation, power sockets and A/C vents for all rows, ABS, EBD, dual airbags and many more.

New Honda City, the bestselling sedan in the C-segment gets new VX (O) variant which is now positioned above VX variant to become new top range variants in the line-up. The VX (O) Petrol and diesel variant is priced at Rs. 10.64 lakh and 11.83 lakh respectively. Mechanically it remains same with 1.5L petrol and diesel engines while it gets 6.1 inch touch system with satellite and voice based navigation, rear camera assistance and USB/Aux-in, bluetooth connectivity. Honda city has become the fastest car to reach 1 lakh sales mark and City reached the landmark in the span of just 15 months.

Last Month we witnessed the launch of V40 Cross country petrol variant hatchback in India at Rs. 27 lakh (ex-showroom). Powering this vehicle is a 1.6L GTDi petrol engine that is good for 180bhp power and 240Nm torque and comes mated with a six-speed automatic transmission. Visually it is similar to the diesel sibling and flaunts honeycomb grille, Volvo’s conventional tail lights etc. The diesel variant of V40 cross country comes with a turbocharged engine delivering 150bhp of maximum output and 350NM of torque and priced at Rs. 31.6 lakh. Volvo V40 will be brought as CBU (Completely build up unit) in the country and competes against BMW X1, Mercedes-Benz GLA.

In April 2015 Hyundai has silently rolled out the updated version of its premium sedan Elantra with subtle exterior and interior changes. The updated Elantra is now priced at Rs. 14.13-17.94 lakh and features projector headlamps with LED guide function, redesigned hexagonal front bumper and new 16 inch alloy wheels.  On the inside all black dashboard replaces the dual tone one, 4.3 inch infotainment system now offers rear view camera display and bluetooth assistance. Though this is not a facelift version, it’s an updated version while the new Elantra will come in early 2016.

Audi that showcased the new Audi TT coupe at Geneva Motor show last year has finally launched the 2015 TT coupe in India at Rs. 60.34 lakh (ex-showroom Delhi). New Audi TT is facelifted version of iconic sports car Audi TT, which is around 5 lakh the costlier than the previous one. 2015 Audi TT caries the same 2.0L turbocharged engine which is good enough to churn out 227bhp power and 370Nm torque, paired with a 6-speed dual clutch automatic gearbox. 2015 now features Audi’s LED matrix headlights and its overall silhouette bears a resemblance to an Audi R8 especially the front profile.

Hyundai India has updated its SUV Santa Fe with some features such as 8 inch touchscreen unit with voice based route guidance, Navigation with 3 years of free map updates and supports USB, Aux-in, DVD and I-POD connectivity. Santa Fe also gets Automatic headlamps, tweaked ORVMs (outside rear view mirrors) with turn indicators. Mechanically it remains same, gets power from 2.2L diesel engine and it is available in 2WD and 4WD variants. Hyundai Santa Fe ranges between Rs. 26.88 lakh to 30.20 lakh and battles with Toyota Fortuner and Mitsubishi Pajero Sport in India.

The final product to be launched last month was 2015 Camry by Toyota which was launched in petrol along with its Hybrid variant at Rs. 28.80 lakh and 31.20 lakh respectively in India. In terms of exterior changes 2015 Camry gets a revised grille with chrome strip, new LED projector headlamps with DRLs, new 17 inch alloy wheels, rectangular fog lights, new tail lamps etc. Mechanically it remains unaltered while it features better screen for 6.1 inch infotainment system, new three spoke steering wheel and many more.