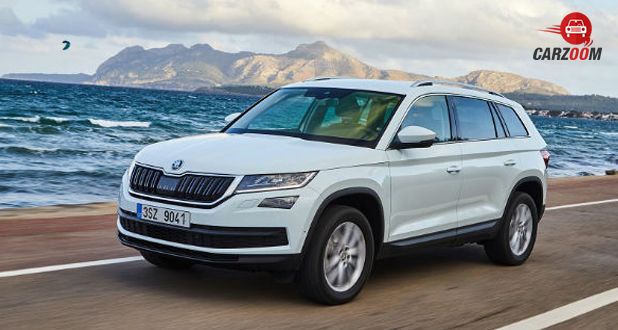 Earlier Skoda introduced the seven-seat Kodiaq SUV in the country and nowthe coupe version of the Kodiaq called the Kodiaq GT has been spotted in China. The SUV is said to be positioned above the Kodiaq in India and would be a five-seat layout. The car seems to have taken a sportier look  and would be introduced in  at the Chengdu Auto Show in September. Here we bring what the SUV is expected to come with.

The car is said to have a roofline with wide arches and a rear window spoiler. The GT looks largely identical to the standard SUV but we except some mild modifications to the front bumper and the grille. The coupe’s roofline dips more dramatically at the rear compared to the SUV earlier. The GT would be smaller in length that is obvious as it is a 5-seater car. This time the highly raked rear glass and the tail lamps will also be modified. The bumper will still house a wide reflector and two exhaust tips on either side as before.

Under the hood it would be powered by a 2.0-litre turbo engine that generates 150bhp of power at 3500rpm and 340Nm of torque at 1750rpm. The Skoda Kodiaq GT Coupe engine would be mated to a DSG automatic gearbox and AWD system.

The car would launch somewhere next year.  The Skoda Kodiaq is currently available in India only in a single variant that is priced at 34.83 lakh INR (ex-showroom pan-India).

Detailed specifications of the car would be introduced post its official unveiling at the upcoming Chengdu Motor Show. It is expected to be offered with new set of features  and we are excited to see what it comes with.