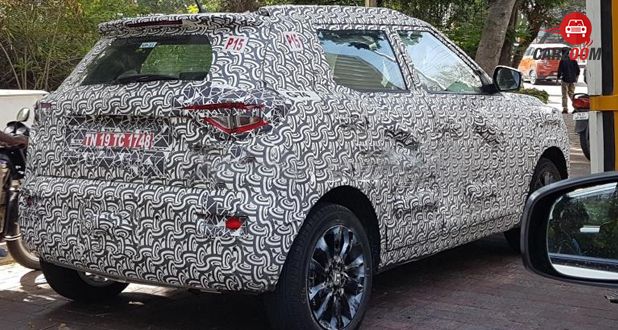 Mahindra’s subcompact SUV is expected to hit the markets towards the end of this year. The launch is still some time away but the car was recently spotted testing in Chennai. We bring you the latest updates on the SUV that is expected to launch by the end of the year.

On the engine options the SUV is likely to use the 1.2-litre G80 turbocharged petrol and 1.5-litre diesel under the hood. The car’s engine is expected to produce 100 bhp of max power. Both engines are said to come with a 5-speed manual transmission gearbox, while also the option of an automatic cannot be ruled out. The company might also surprise us with a new 1.6-litre diesel engine, and 1.5-litre petrol motor, and it would be exciting to see what it comes with finally. The new engines will also meet the upcoming BS-VI emission norm.

The spy image reveals that the car gets gloss black finish alloy wheels, pull type door handles, roof rails on the subcompact SUV. It could also get a touchscreen infotainment system that will come with Android Auto. Not only this, we also expect that Mahindra would introduce Apple CarPlay as well on the car. There are expectations that the vehicle would get plush interiors, feature loaded cabin and possibly a sunroof too. The Mahindra SUV will be the third offering after the XUV500 and KUV100 to be underpinned by a monologue platform. We expect to see new projector headlamps with LED daytime running lamps, wide chrome grille, and a muscular front bumper among other features.

The SUV will give a tough competition  Maruti Suzuki Vitara Brezza, Ford EcoSport and Tata Nexon.

The upcoming S201 subcompact SUV is expected to be priced around 7 lakh INR  (ex-showroom).