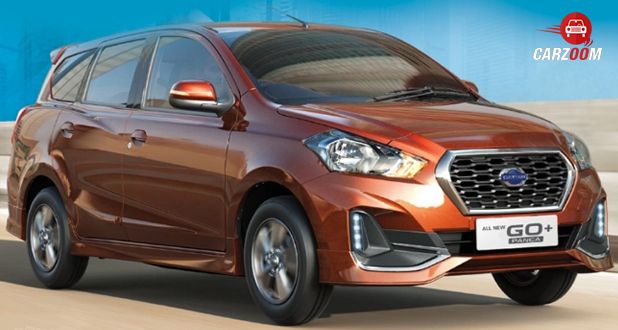 The Datsun Go and Go+ are all set to launch their facelifts in India after launching them in the Indonesian markets. The GO+ micro MPV was recently spotted testing in the country confirming the rumors. Both the cars would launch latest by Diwali in India.Their model updates were launched in Indonesia earlier and now are finalized for the Indian markets. Here we bring the highlights of both the cars, take a look.

The cars get redesigned front bumper and redi-GO-like daytime running LEDs. Both the facelifts would be sportier in looks as compared to their pre-facelift versions. This time Datsun gives its cars better high- and low-beam illumination same as the revised smoked headlamps in the Indonesia-spec facelift. The car’s hexagonal grille now has mesh pattern as seen in Indonesia. Not only this, there’s a new electrically adjustable outside rear view mirror with integrated turn signals, 14-inch alloy wheels on higher models with wider 165/70 cross-section tyres compared to 13-inch 155/70 offered before. Both the cars will possess different rear bumpers too. In the cabin there will be a  premium-looking dashboard that sports an all-black theme which was previously a dual-tone black and beige dashboard in Indonesia. The car’s front seats will be replaced by proper bucket seats and it gets a new 6.75-inch touch screen infotainment system that offers Bluetooth phone integration along with playback through MP3, USB and AUX.

Under the hood the GO and GO+ will carry forward the same 1.2-litre 3-cylinder petrol engine that produces 68PS/104Nm torque and is mated to a 5-speed manual transmission.

The Indian-spec model is said to get dual front airbags and ABS for safety norms.