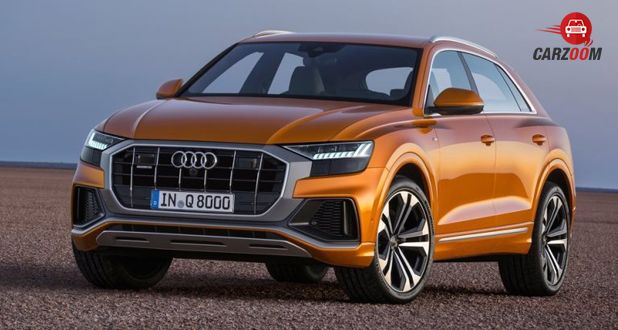 Audi had already announced its Q8 concept before in the Auto Show and now the German carmaker has come up with Q8 SUV. Successor of Audi Q7, the car will be available with an optional all-wheel steering and much more added features. Check out other details on this new SUV by Audi. 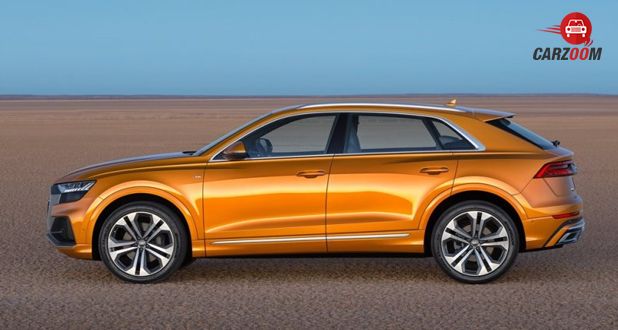 The SUV is 62mm shorter in length, 32mm wider and 30mm lower, compared to its younger sibling. The car gets a wheel base of 2987mm that is 7mm lesser than the Q7. The luggage capacity will be 650 litres while the Q7 had a capacity of 770 litre. The new Audi is not aimed to be a full-size luxury SUV but rather a lifestyle vehicle. The car on front gets large grille flanked by sleek LED headlamps with air vents at bottom.  It gets a drooping coupe-like roofline and a disconnected shoulder line which adds muscle to the front and the rear portion of the vehicle.

The car on inside gets a dashboard inspired by the new-gen A8. There are two screens to control the functions inside the SUV. It gets a 10.1-inch touchscreen unit located in the piano black dashboard, and a second 8.6-inch unit placed on the central tunnel, along with air conditioning, convenience features etc. There is also a fully digital virtual cockpit too. Moreover, the Q8 gets a Bang & Olufsen 3D Sound System and Audi connect data transfer module with the LTE Advanced and a Wi-Fi hotspot as standard.

The Q8 will be offered with a 3.0-litre V6 diesel engine that makes 286PS of maximum power and produces 600Nm of peak torque. It will be mated to an 8-speed automatic transmission. Audi plans to offer the Q8 with a 3.0-litre petrol engine too.

It has already been spotted being tested in India so  will launch  soon after its international debut in the third quarter of 2018.  The price the car is expected to come with is 1 crore INR and will compete against the BMW X6