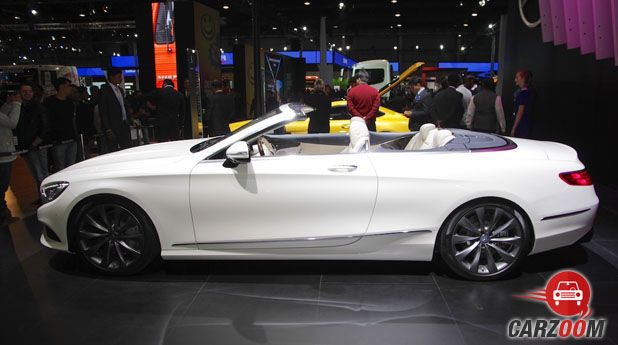 Mercedes-Benz has been dictating the luxury car segment in India for a while now and winning the competition with all hands down. In recent times, the carmaker has launched some beautiful cars such as E400 Cabriolet, C63 S, CLA class and AMG GT-S which was certainly the beautiful of the lot. Carry forwarding the legacy, Audi launched the stylishly designed R8 V10 and beautiful A8L security.

The German giant has showcased the stunning looking S-class cabriolet at the 2016 Auto Expo in Greater Noida. Making its comeback after a long gap of almost 45 years, the cabriolet will be the part of 12 launches slated for 2016.

When you look at the Cabriolet, it isn’t a new car; it is just a two door coupe version as compared to the conventional four door variant. What differentiates both the models is the soft roof top which can be operated up to 60km/hr and under the time frame of around 20 seconds.

The car also comes with THERMOTRONIC climate control having 12 sensors and 18 actuators which keeps the occupants comfortable regardless to roof is up or down. It also has a feature called AIRSCARF which is used for neck heating.

Now let’s head towards the main segment which is the powertrain, for the Indian market the Cabriolet is expected to be powered by a 4.7 litre twin turbo petrol engine which is good for [email protected] of output and 700Nm of high torque. The power is sent to all wheels via 9-speed automatic gearbox. In international markets, it will be getting range of engine choices which includes 5 petrol and two diesel variants.