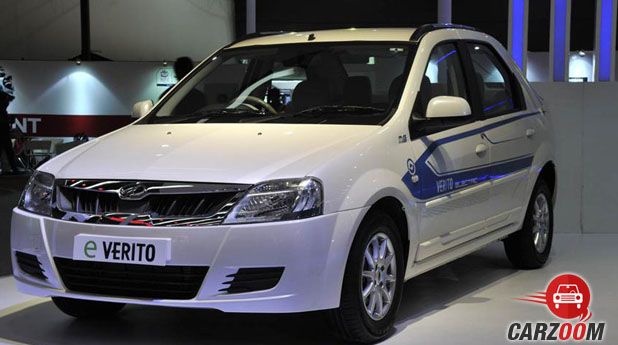 Indian UV giant Mahindra and Mahindra has jumped into the Bandwagon of electric vehicles by revealing the eco friendly variant of Verito sedan at the 2016 Auto Expo. Basically the car was shown at the 2014 edition of Expo as a concept but now it is displayed in a production ready form alongside e2O Sport. If reports are to be believed, Mahindra will be launching the sedan by the end of this month.

To be priced between Rs. 8-11 lakh (ex-showroom), the sedan gets a 72V AC induction electric motor which develops 41hp [email protected] and peak torque of [email protected] The motor is paired to an automatic transmission and can achieve a top speed of 86km/hr (-/+ 2). The braking segment is handled by Disc brakes at front and drum at rear.

The battery takes 7 hours to get fully charged up and deliver run of 100km with a full charged battery. The top variant of the sedan gets a quick charge battery which can be fully charged up in just two hours.

The E-Verito comes with some changes which include tweaked front fascia, revised front grille while side remain same but rear now sports a chrome bar on the boot lid, redesigned tail lamps and roof rails. Also, the changes have been made inside the cabin like reworked instrument cluster, electrically adjustable ORVMs, a 2 DIN audio system with USB, bluetooth, connectivity and climate control etc. The good thing about E-Verito is that it will be benefited by the government’s FAME scheme which will further cut down the prices of sedan by up to Rs. 40,000.