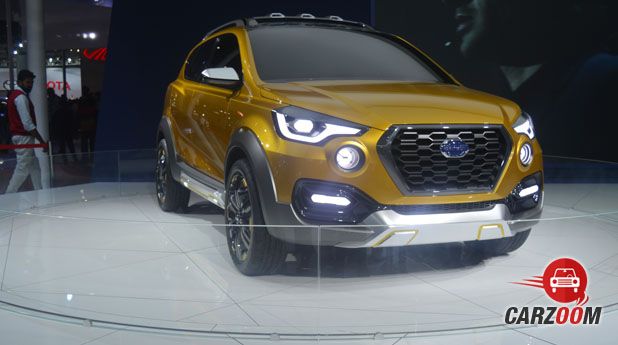 Datsun, the budget brand has showcased the Go Cross crossover concept at the concluded 13th edition of auto expo. The concept was first unveiled last year at the Tokyo international motor show and it is based on Go+ MPV. It will sit above Go hatch and Go+ MPV and will be priced higher than both these models. The Go Cross will be offered in five or seven seater layout to take on KUV100, Ford EcoSport and Hyundai Creta in the segment.

We got to see the prototype of the concept and if it’s anywhere close to the production ready vehicle then we must say it’s really impressive. The Go and Go+ got a lukewarm response from the buyers in India especially over the safety issues. The new model is brawny version of the seven seater MPV flaunting higher ground clearance and crossover styling.

In terms of features, it will be loaded with more premium goodies such as touchscreen infotainment system, dual zone climate control, driver seat adjustability, rear AC vents and much more. Datsun current models are criticized for lack of safety so we might see dual front airbags along with other basic aids as option if not as standard.

Power will be drawn from a Go powered 1.2l engine but with more power while it will also be offered with 1.5l TDCi diesel mill used on Renault Duster. Both the engines would get a 5-speed manual transmission but we can expect an AMT with either of the engines. With an expected initial price range of Rs. 6 lakh (e-showroom), it will make to the Indian shores in early next year.