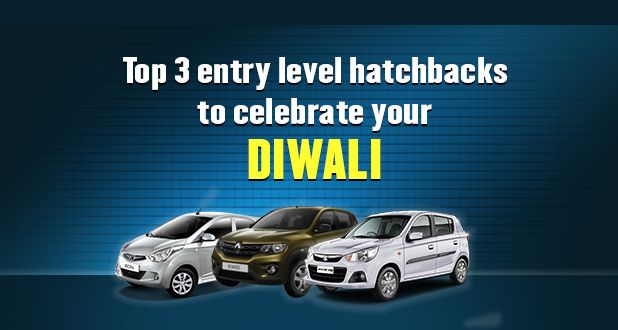 Selling hatchbacks in India is as brisk as selling free cupcakes, in India around 60-65 percent of the total market consist of hatchbacks. The Hatchbacks are quite popular in India as they are pocket friendly in terms of price, offers good fuel efficiency making it a good value for money and tempting prospect for buyers. In general, Hatchbacks are smaller in size which can be maneuvered easily in heavy traffic. When we talk of small cars, Maruti Suzuki rules the segment with cars like Alto 800/K10, Celerio, Wagon R and Swift. Top 10 list of bestselling car in India is dominated by these cars and that too with great numbers. Moreover, India’s second largest carmaker Hyundai is also in the pursuit with Eon and Grand i10 which collectively sells over 14-15K units a month.

Festive season is just a week away and this is the time we rush to the stores to buy new things be it clothes, electronics, appliances and even cars and bikes. This festive phase is taken as a golden period by car manufactures to launch their new products. Currently, there is plethora of options available in the entry level segment and Indian customers are spoilt for choice. As the crackers and fireworks are lined up to go up in the smoke, we take a look at some top selling hatchbacks in India which could be a great deal for you this Diwali.

It’s been a decade that Alto has been the bestselling car for Maruti Suzuki in India. The sole reason for such a huge popularity is the value for money quotient of the car which being shaken at frequent time periods by the competitors such as Hyundai Eon, Tata Nano etc. Under ‘Alto’ badge Maruti sells ‘800’ and ‘K10’. In 2014, Maruti Suzuki celebrated 25 lakhs Altos on road since its advent proving how crazy we are about this car. Powered by a 3-cylinder petrol engine, K10 puts out 67bhp [email protected] and 90Nm of peak [email protected] offers comfort ride combined with strong performance making it a convenient and agile city car. The hatch returns an overall fuel efficiency of 24.07KMPL for the petrol mill and 32.36km/kg for CNG. The Alto K10 is also available with AGS (Auto gear shift) transmission. If you’re looking for budget friendly decent city commuter, then Alto will suit your needs.

Like segment leader Alto, Hyundai Eon too is a regular guest to the top 5 list with the sales around 5-6k units a month since its launch. This feat has been achieved regularly thanks to the aggressive design, best in class fit and finish, well packaged and spacious interiors. Besides competition coming from Datsun Go, Alto and beat, Eon manages to deliver healthy numbers for Hyundai on regular basis. Eon is certainly the better looker than Alto with all credit goes to Hyundai’s new Fluidic design philosophy. It is noticeably quicker than Alto with cruising at 100km/hr isn’t a stressed task. In next year, Hyundai will be launching the facelift version of Eon.

Renault Kwid has helped the company to gain a good rooting in the Indian entry level car market with its SUV-ish design approach, affordable price, ultra spacious cabin and many first in class features. The car has taken the Indian car market by storm with 25000 confirmed bookings in just 5 weeks of its launch. With an introductory price of just Rs. 2.56 lakh it undercuts most of its rivals by huge margin and it finishes at Rs. 3.53 lakh which is also quite decent considering the features on offer. It impresses with features like 7 inch MediaNAV infotainment system with navigation, best in class of boot space of 300 liters, segment best fuel efficiency of 25.17 KMPL and driver side airbag. The 799cc engine delivers civilized city throttle with neutral handling. With the wheelbase of 2422mm it also offers way better space than Alto k10 and Hyundai Eon.