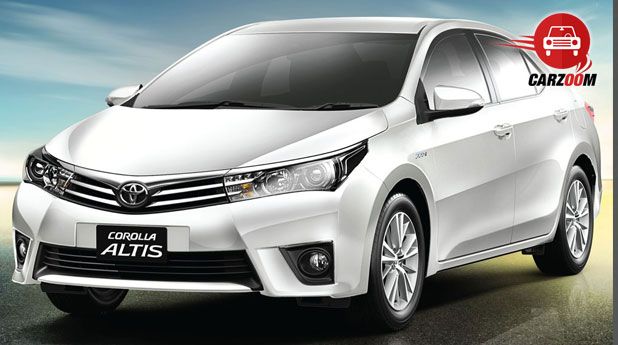 Earlier we told you about the exciting plan of launching all-new Corolla Altis by Toyota brand till the mid of this year. Well, news is that company has finally launched the updated version of its trendy sedan today i.e. 27th May 2014 in Indian car market. Toyota has already showcased this all-new Corolla Altis in 12th Auto Expo in February this year and bookings too were open for this trendy sedan since then. Let’s see what new this car gets.

While the earlier Corolla Altis carried the price tags between 11.4-15.8 lakhs, company has revised this price range now with this renovation.

Now, the petrol variants of all-new Corolla Altis come within price brackets of 11.99-16.89 lakhs while on the contrary, diesel variants cost between 13.07-16.68 lakhs.

As per the company, the petrol model is available with an improved super CVT-i with 7-speed sequential shiftmatic gearbox with the newly introduced ‘Paddle Shift’. A 6-speed manual transmission is available in both petrol and diesel models.

The updated version is now 4620mm long, 1775mm wide and 1475mm tall while wheelbase also gets a hike of 100mm and thus the increased wheelbase is of 2700mm now. Further, it carries boot space of 470 liters and ground clearance of 175mm.

Reportedly, company is offering a special accessory package ‘The Benchmark Collection’ with this facelift model which has a unique collection of premium accessories.

Other than this, the interior of this classy sedan is designed with cyber carbon piano black instrument panel cluster, chrome inside door handle, 3 spoke leather steering wheel with Bluetooth control, newly designed optitron meter with illumination and illumination for entry, cup-holder  and near the foot etc.

With this updation, company has made the Corolla Altis refreshed than before by designing it with new radiator grille, LED headlamps and clearance lamps, R16 alloy wheels(in top variant), rear chrome garnish etc which all together giving it a prestigious look at outside.

Commenting on the launch, TKM Director and Senior Vice President (Sales and Marketing) N Raja said, “We have sold more than 88,500 units of Corolla Altis since its introduction in India in 2003. We received a good response after we unveiled the vehicle at the Auto Expo in February. We are currently booked for 3 months. We hope the All New Corolla Altis, will further strengthen the brand in India and will also contribute to the growth of the C segment in India.”