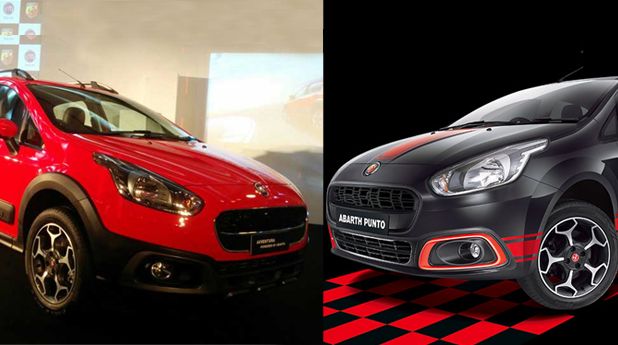 The wait is finally over! Fiat has officially introduced its Abarth brand in India with launch of Avventura and Punto powered by Abarth. Both the models are offered in a single variant only at a similar price of Rs. 9.95 lakh (ex-showroom Delhi). Till now, Volkswagen Polo TSI and Ford new Figo (1.5l petrol variant) considered as enthusiast cars but with launch of both these models, petrol heads will get an alluring alternative. Here is all you need to know about the performance centric vehicles:-

Both the models draw power from the same 1.4 litre T-jet Turbocharged petrol engine tuned to produce best in class figures. The T-jet engine churns out 145bhp power@5500rpm along with 212Nm of peak torque@2000-4000rpm in Abarth Punto. The Abarth powered Avventura pulls out 140bhp power and 210Nm torque between 2000-4000rpm. If these figures aren’t enough to excite you then its accessibility with a 5-speed manual gearbox will certainly animate you.

The manual gearbox propels Punto Abarth to hit a ton in 8.8 seconds with the top speed of 190km/hr while Avventura achieve the same in 9.9 seconds. Despite of the power figures, both the vehicles are fuel efficient- Abarth Punto delivers an ARAI certified mileage of 16.3 KMPL while Avventura is good enough to produce 17.1 KMPL of ARAI endorsed fuel efficiency. According to Italian car maker, suspension has been stiffened up and the cars also benefits from all four disc brakes. For those asking, Fiat Abarth Punto is fastest hatchback in the country under the Rs. 10 lakh segment.

Seating is comfortable for up to five adults on both and in context to the powerful engine; the ground clearance of the Punto Abarth has been reduced by 20mm to 155mm while no change has been done to Avventura Abarth. Both the cars falls under sub 4m category with the dimensions:-

The Abarth version of Punto isn’t drastically different from the standard model albeit of some cosmetic upgrades. The hatch gets chrome treatment on front grille and front-rear fog lamps, all four door handles and exhaust pipe at rear. Sides of the car are ornamented by racy Abarth side decals, sport side skirts, red colored ORVMs (outer rear view mirrors) and 16 inchers Scorpion claw alloy wheels making it sportiest of the lot. Rear remain almost similar to the standard model save for Scorpion Abarth logo replacing the Fiat one, thick red line on the bumper integrated with two reflectors.

Almost all the design on Abarth Avventura is same as the stock car except for the contrast accents on front grille, 16 inch Scorpion alloy wheels, racy side strips and some scorpion badges all around.

Interior too get minimal changes like the overall layout of the cabin is same as before. The soft touch dashboard now gets black treatment with metallic inserts, black seats with contrast stitching to add the sporty ingredient. The Steering wheel and gear knob wrapped in premium leather with the former getting the Abarth logo in the middle replacing the Fiat’s logo.

The interior of Abarth Avventura gets dual tone dashboard along with some special fabrics to differentiate from the regular variants and to add some sporty feel.

Safety assist on the duo includes a dual front airbags with early crash sensors, immobilizer with rolling code (FCS), ABS (Anti-lock braking system) with EBD (electronic brake force distribution), central door locking and automatic door lock. There is fire prevention system (FPS) that cuts down the fuel supply in case of accident, 3-pointer ELR seat belts with pretensioners and load limiters and all four disc brakes on board on both the vehicles.

Speaking on the launch, Kevin Flynn, President and Managing Director, FCA India Automobiles Pvt. Ltd. said, “We are delighted to roll-out the Abarth Punto which is a performance oriented hatchback. This indigenously designed hot hatch is crafted to rev-up the adrenalin of the racing enthusiasts by delivering exhilarating speed and stability at the same time. The Italian styling and design, stability at high speeds, lowered ground clearance and host of plush features makes the Abarth Punto the hottest and the fastest hatchback available in the country”.