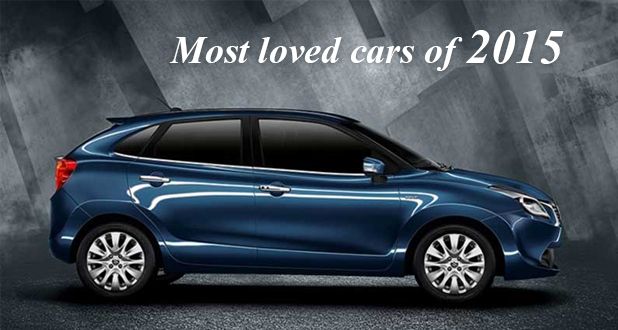 The year 2015 has been one of the most fruitful years for the Indian car market and it becomes even more special as the two bygone years weren’t to cheer about. Thanks to Various carmakers who have taken the Indian auto industry to all new level with their novel launches. The current year saw a broad range of vehicles that were launched starting from Mercedes’ 15 new models, Datsun Go+ MPV, BMW i8, Creta, Kwid.
As many cars moved ahead with the ladder of success like Hyundai India, Renault while there were others have not been that flourishing. Now the year is about to end, we present to you some of the most loved cars for the year of 2015:-

Perhaps the hottest launch of the year came from the French auto giant in the form of Kwid. The car certainly created a benchmark in the entry level hatchback segment and emerged as the real challenger for undisputed king Alto till date. There are various factors that worked in favor of Kwid such as SUV-ish stance, 300 liters of massive boot space, aggressive pricing, spacious cabin, best in segment fuel efficiency and many first in class features. Renault received a pat from the buyers on the form of over 75,000 confirmed bookings and helped it to achieve 144% growth in the month of November 2015. The small wonder aka baby duster is priced in the range of Rs 2.56-Rs 3.53 lakh (ex-showroom, Delhi). Renault will soon launch 1.0 litre petrol engine and automatic transmission with Kwid in 2016.

The baby Santa Fe aka Creta SUV has been another success story for the South Korean carmaker Hyundai motors in India. Launched in July this year, the Creta is heading towards 1 lakh bookings despite getting the stiff competition from Renault Duster, Nissan Terrano, and Mahindra Scorpio etc. Priced between 8.69 lakh and 13.60 lakhs (ex-showroom Delhi), it is the only compact diesel SUV to be available with an automatic transmission. Creta is not only a good looker but a decent performer too flanked by gills of Avant-grade features and array of new engines also works in favor of Creta. These aforementioned factors make Creta a worthy and complete package.

The Indian SUV king Mahindra has launched its second sub 4 meter SUV TUV300 on 10 September at an initial price tag of Rs. 6.90 lakhs (ex-showroom Delhi). It flaunts a boxy design inspired by a battle tank may not of everyone’s taste but presence of seven seating configuration and AMT made it a huge success for the home grown carmaker. The TUV300 comes fuelled with a new 1.5 litre mhawk engine badged as mhawk80 that delivers 84bhp power and 230Nm of torque, paired to a 5-speed manual gearbox. Despite a bit shaky on engine front the average sale for TUV300 stands at 4200 units a month.

The phrase ‘it’s better to be late than never’ perfectly fits on Ford’s first ever sub 4m sedan Figo Aspire who came late to the already overcrowded competitive segment. The compact sedan is available with three engine options: a 1.2-litre petrol with 87bhp, a 1.5 litre petrol and 1.5 litre diesel. The bigger petrol is available with a six speed dual clutch transmission while remaining gets a five speed manual. The USPs of Aspire includes its Aston martin grille, well proportionate design, leather seats, six airbags, massive boot space, powerful ride and handling etc. In the first two months of its launch it managed to retail over 5000 units a month but the things slowed down in the following months.

The Baleno is another offering to tempt premium hatchback buyers in the country. Past experience of the India’s leading car maker in the premium segment hasn’t been good at all, Baleno sedan, Kizashi and even S-Cross failed to make huge impact on buyers. But it seems that this might not be the case with Baleno going by the initial response it’s getting. It has been a sensation despite of being pitched against the segment leader Hyundai Elite i20, Honda Jazz and VW Polo. The premium hatchback gets the same tried and tested range of engines- 1.2l petrol and 1.3l DDis diesel engines, the latter one delivers best in class mileage of 27.39 KMPL. It outshined the elite i20 in the month of November with 9074 units against 8200 units of i20. Within first 15 days of its launch, it grabbed over 21,000 confirmed bookings thanks to standard safety features, first in segment features like apple car play infotainment system, aggressive pricing which undercuts most its rivals etc. Maruti will soon launch 1.0l turbocharged petrol engine equipped Baleno in the coming months which will make it even more value for money product as it will target the young enthusiasts.

Volvo, one of the renowned luxury brands around the world launched its premium SUV XC 90 in India this year which is based on firm’s new Scalable product architecture (SPA). Price starts from Rs. 64.90 lakh (ex-showroom Delhi); Volvo XC 90 stands out in terms of its design and long list of features making it a desirable SUV. The powerful 2.0 litre engine paired to an eight speed automatic transmission propels car to hit 0-100km/hr speed in just 7.3 seconds before hitting the top speed of 230km/hr. With stunning design, premium interiors, spacious and practical cabin, the Second Gen Volvo XC 90 is a serious contender for the premium SUV of the year award.

Honda has re-launched its premium hatchback in July 2015 in the country after discontinuing it in 2013 due to absence of diesel engine and sky rocketing price range. New Jazz arrives in all new Avatar which include cosmetic upgrades, reworked silhouette, additional features, high localization content and most important of them all is addition of a diesel engine. New Jazz looks like a small MPV than a hatchback thanks to altered stance and side character lines. Design features sleek headlamps with matte black finish grille, large roof spoiler, thick chrome strip and sporty tail lamps. The new premium hatchback has number of new features like 6.2 inch touchscreen infotainment system, small 5 inch screen for temperature control and reverse parking camera assistance, power windows, leather coated gear lever, steering wheel and many more. Price between Rs. 5.23-8.59 lakhs (ex-showroom), the new Jazz is available in 1.2l I-Vtec petrol that develops 89bhp and 109Nm mated with a 5-speed manual and a CVT gearbox. The new model now comes with a City sedan powered 1.5l i-Dtec diesel mill which is good for max power of 99bhp and 200Nm of torque; it is one of the fuel efficient cars in the country with 27.30 KMPL of outstanding mileage. Despite stiff competition from Hyundai Elite i20, Volkswagen Polo and Maruti Baleno it sells around 4000 units a month, though it witnessed a dip of around 1000 units after the launch of Baleno.

The new kid in the hatchback segment is revamped Figo which was initially in March 2010 with loads of hype. The old Gen Figo was one of the important cars for the carmaker, new Figo comes with plethora of changes which certainly bettered the hatchback and it shares its design cues from the sedan sibling Aspire. New Figo now comes with three engine options- 1.2 l and 1.5l petrol and a 1.5l TDCi diesel motor. The bigger petrol mill is available with a six speed dual clutch automatic gearbox. Ford has given dual front airbags, ABS with EBD as standard across all the variants while the top spec gets six airbags. The new GEN Figo retails over 3000 units a month which is quite good as compared to older model but it way below against segment leader Maruti Suzuki Swift and Hyundai Grand i10.

The performance oriented brand of Fiat, Abarth introduced its second model in India in the form of Punto Abarth alongside Avventura Abarth. The hot hatch comes equipped with powerful 1.4l T-Jet petrol motor that puts 145bhp power and 212Nm of peak torque, matched to a 5-speed manual gearbox. It can accomplish 100km mark from a standstill in just 8.8 seconds with the top speed of around 200km/hr. Nothing has changed much on the outside except for the new exterior color options, contrast red color strips all around the model and 16 inch Scorpion alloy wheels to enhance its feel. The cabin too remains same as regular Punto EVO which certainly looks dated considering it is a Rs. 10 lakh hatchback. The model is built for sheer performance and when the light turns green you feel this hatch is something special.

2015 witnessed the launch of first ever made in India sportscar which was originally showcased in 2012. The Indian car buyers have waited for a long time to try their hands on the country’s indigenous sportscar. Besides its Ferrari+ Lamborghini design, the supercar comes at a very affordable price of Rs. 35 lakhs (ex-showroom). Coming to first things first, the front looks really aggressive thanks to downward sloping bonnet, Halogen headlamps flanked by LED DRLs and large air dam. The interior segment is a hit or miss kind of affair as fit and finish is still a work in progress. To compliment elegance with performance, it is powered by the Renault sourced 2000cc 2.0l turbocharged petrol engine that manages to deliver 250bhp power and 360Nm of high torque. It races from 0 to 100 km mark in nerve reckoning 6 seconds and it handles good as well.
Besides these cars there were more models surprised the buyers with their presence like BMW i8, Tata GENX Nano, Toyota Camry Hybrid, new Audi Q7, Maserati, Mercedes-Benz CLA, Audi RS6 Avant, Tata Bolt, Landover Discovery Sport, Mercedes Maybach series, new Swift Dzire, Datsun GO+, Hyundai i20 Active, Renault Lodgy etc.