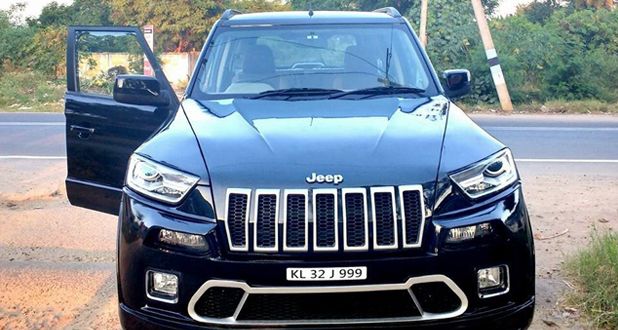 When XUV500 was launched four years ago, it proved to be a mighty hit as Mahindra loaded it with the range of comfort features and muscular design philosophy. In the meantime, the SUV king updated its best seller Scorpio SUV with the new design and creature comforts. Still, there was something missing from the lineup and then M&M jumped into the sub 4m segment with TUV300. The compact SUV looks militaristic designed by Ferrari designer Pininfarina.

Mahindra has a rich heritage of SUVs which made its connection with buyers quite stronger. We have seen many Mahindra cars being modified like Bolero into Wagon, Thar as open Jeep and Scorpio as Hummer. Seeing the off-roaders’ enthusiasm, Jeep finally hit the Indian shores last year but the enthusiasm hit badly by brand’s steep price range.

However, India is known for Jugads (substitute) so need not to get disheartened as here is a cheaper alternative. A TUV300 owner from Kerala has modified its vehicle to premium Jeep Cherokee and shared images of the same. The modification work has been done by a workshop in Kerala and the car has gone through extensive revisions.

Most of the changes can been at front such as bonnet has revised completely, original headlamps have been replaced and here come projector units of Audi Q3. In addition, in place of original grille and bumper, it gets redesigned one similar to Grand Cherokee. The Fog lamps have been retained.

Also, Rear has been devoid of tailgate mounted spare wheel and instead gets a tiny Jeep logo. Changes to the cabin remain unknown; however, color mods are expected. The engine segment remains untouched as it sports the same 1.5l mhawk diesel engine that makes 84PS power and 230Nm of torque, linked to a 5-speed manual and an AMT gearbox. Now you might be thinking how much it would have cost? Here’s a shocker, price of entire modification is mere Rs. 1.5 lakh which is a steal. However, you can save for India bound Jeep compass SUV which is slated for launch in mid-2017.