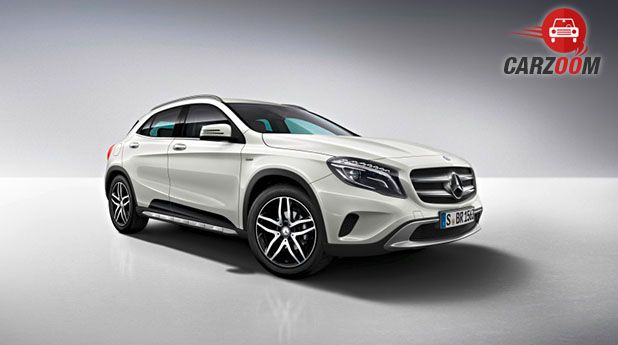 There has been a flourish of limited/special editions in the Indian market and now it’s for country’s ace luxury carmaker Mercedes-Benz to jump into the bandwagon. The German auto giant has taken one step closer towards its 12 in 16 goal (12 new cars in 2016) with the launch of its new off roader GLA 220d activity edition. This launch also marks brand’s sixth SUV and 9th launch for the year.

The Mercedes-Benz GLA 220d 4MATIC activity edition is priced at Rs. 38.51 lakh (ex-showroom Pune) which is Rs. 1.61 lakh more than the standard variant. Since its launch in 2014, Mercedes has retailed more than 3500 units of the luxury SUV in India. The standard GLA 220 is available in petrol; diesel and performance oriented AMG Avatar.

Mercedes has given it some special treatment to differentiate from the standard model like it gets black decals along with chrome touch on the lower part of the doors. It has ‘Activity edition’ badge on front fenders, new five spoke 18 inch alloy wheels and an exclusive mountain grey color option.

Under the hood is a 2143cc 4-cylinder diesel engine that makes 168bhp [email protected] and 350Nm of [email protected], linked to a 7-speed dual clutch automatic gearbox. Power is sent to all four wheel via 4MATIC permanent all wheel drive system. The compact SUV can do 100km/hr run from dead halt in just 7.7 seconds.  The engine also gets support of a dynamic off-road mode option along with the Comfort, Sport and Eco modes.

Commenting on the launch of new Activity Edition, Mercedes-Benz India Managing Director and CEO, Mr.Roland Folger said, “Mercedes-Benz’s SUV portfolio witnessed a strong demand since its introduction and grew over 100% in the last couple of years. The GLA was a key addition to our SUV portfolio as it not only generated volumes for us, but also opened the SUV segment to a much younger customer base.”