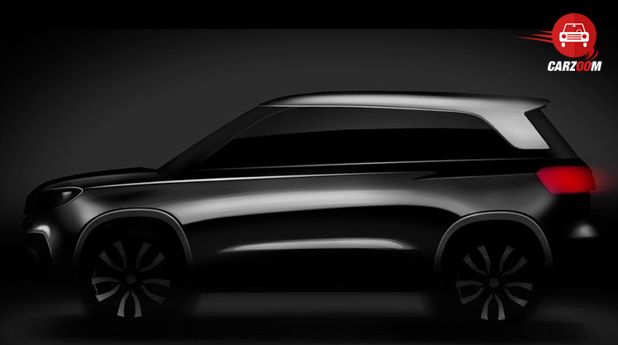 Maruti Suzuki’s first ever sub 4 meter SUV XA Alpha which was showcased at 2012 auto expo is now getting a final touch. Codenamed as YBA, the compact SUV has been doing rounds for a while and now the company has released a first sketch of the compact SUV. Maruti has officially christened it as Vitara Brezza and will be soon launched after making its debut at 2016 Indian auto expo.

Rear profile is enhanced by big angular tail lamps with integrated reverse lights and turn indicators, faux silver skid plate and huge contrasting bumper. On the inside, it will get a premium treatment with features like all black theme, multi function steering wheel, 7 inch Smartplay infotainment system with navigation and revere parking camera assistance, lush seats and much more.

The upcoming compact SUV will be fuelled by Maruti’s existing range of engines- 1.2 litre or 1.4 litre petrol and 1.3l DDis diesel engines. It might also get a 1.6l diesel engine seen on S-cross which makes 118bhp max power and 320Nm of high torque. The petrol variant is expected to house an AMT gearbox and if it happens then Brezza will be the first ever petrol sub 4 metre SUV to get an AMT.

Speaking about the safety equipments the SUV will get dual front airbags and ABS as standard across all variants along with other optional safety features. It will be sold via regular Maruti outlets not via Premium NEXA chain and with high localization levels Maruti is likely to price it aggressively in the range of Rs. 5.4-8 lakh (Ex-showroom).