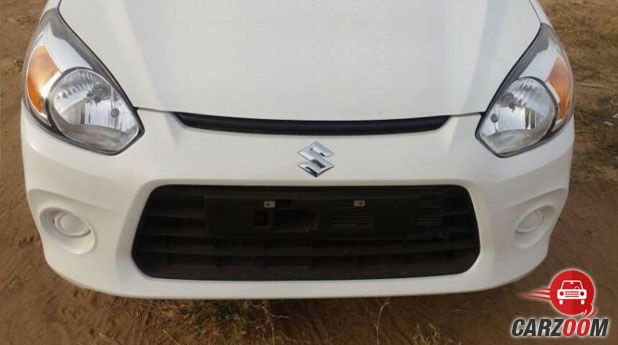 World’s bestselling car, Alto 800 has been generating great numbers for Maruti Suzuki and reign the entry level hatchback segment. Now the facelift version of the hatchback has been spied recently sans camouflage. If reports are to be believed, the car will be launched by end of this month. Renault Kwid is setting sales chart on fire and Datsun will be looking do the same with Redi Go. To counter that, Maruti is pulling up its socks by introducing the mid cycle update of Alto 800.

As seen in the spied images, the car receives minor nip and tucks which might not be significant but enough to keep it fresh. The facelifted Alto 800 receives tweaked headlamps; trapezoidal air dam replacing the hexagonal one, chrome line has been removed from the front grille and the higher variants could get fog lamps as well. The side and rear profile doesn’t look different from the previous model except for the new wheel caps design for the range topping variants.

The interiors will remain unchanged except for some new feature additions or minor tweaks such as chrome treatment or new seat upholstery. The new version will sport driver side airbag and anti-lock braking system (ABS) as optional.

We also don’t expect any changes in the mechanical segment of the hatchback as it continues to be available in petrol and CNG. It continues to draw power from a 796cc petrol motor good for 47bhp of max [email protected] and 69Nm of peak [email protected], linked to a five speed manual gearbox. The car delivers an impressive ARAI certified mileage of 22.74 Kmpl.

The current version is priced in the range of Rs. 2.57-3.78 lakh (ex-showroom Delhi) and the facelift version won’t be getting any increase in prices to encounter the competition and will attract more buyers. Renault Kwid’s 1.0 litre and AMT variants are also coming later this year, so this update will cater Alto to further tighten the pole position grip in the segment.