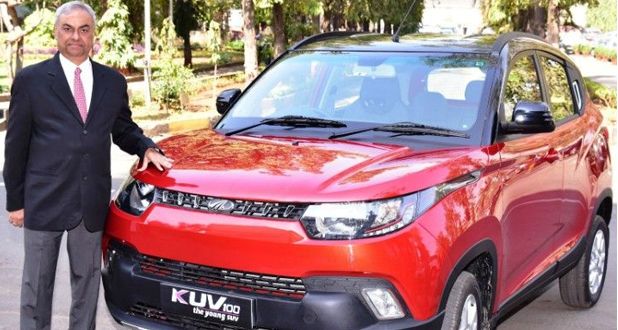 Mahindra has launched KUV100 anniversary edition to celebrate first anniversary of the Micro SUV in India. The limited special edition is available on the top K8 trim with both diesel and petrol powertrains. Priced at Rs. 6.37 lakh (ex-showroom Delhi), the edition is Rs. 13,000 more expensive than the standard model. Mahindra has given it a few cosmetic changes and interior add-ons to further enhance its appeal.

The KUV100 was launched in January 2016 and since then Mahindra has sold over 42,000 units of the Micro SUV in India. The Ignis effect? It seems so as the edition comes just after the launch of Maruti Ignis. Here’s all that you get for extra 13K premium.

The wheels have been updated from 14 inches to 15 inches while k6 and K6+ variants will now come with a spider design 14 inch alloy wheels. Mechanically it remains unchanged– the mFalcon D75 diesel engine delivers 77bhp and 190Nm of torque while mFalcon G80 petrol engine makes 82bhp of power and 114Nm of torque. Both engines are linked to a 5-speed manual gearbox. Reportedly, Mahindra is also working on the CNG powered variant of KUV100.

Mr Pravin Shah, President and Chief Executive (Automotive), M&M Ltd said, on the first anniversary of KUV100, “We would like to thank our customers for their support in creating a new SUV segment. We have introduced the new avatar of the KUV100 with dual tone exterior colour, sporty and premium black interiors and bigger dynamic design alloys wheels along with various accessory kits. We are confident that it will further build on the KUV100’s style quotient and make it a popular choice amongst the youth”.