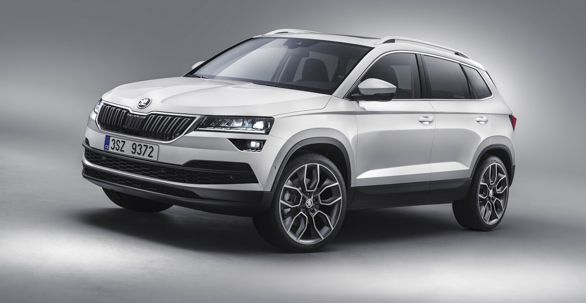 India bound Kodiaq SUV has been unveiled in Sweden which will be the successor to Yeti. The SUV is based on the same MQB platform of Kodiaq and will be launched sometime in next year. It will take on the likes of Volkswagen Tiguan, Jeep compass and Hyundai Tucson in the Indian market. Revealed version seems to be a smaller version while India could see the launch of a seven seater version.

The Karoq measures 4382 mm in length, 1841 mm in width, 1605 mm in height and has a wheelbase of 2638 mm. It sports a huge boot space of 521 liters which can be further expanded up to 1630 liters by folding down the rear seats. Thanks to VarioFlex system maximum boot capacity can be increased to 1810 liters. It design based on larger Kodiaq along with Alaskan language based naming convention.

The Karoq will be offered with two petrol engines- 1.5l TSI engine that makes 150bhp power and can does 0-100 km/hr sprint in 8.4 seconds. The 1.0 TSI petrol engine can make 115bhp of max output. There would be three diesel engines on offer 2.0l TDI diesel with 150bhpm 1.6l TDI with 115bhp and 2.0l TDI turbocharged with 189bhp of max output. Transmission options include six speed manual as standard along with 7-speed DSG automatic as optional.