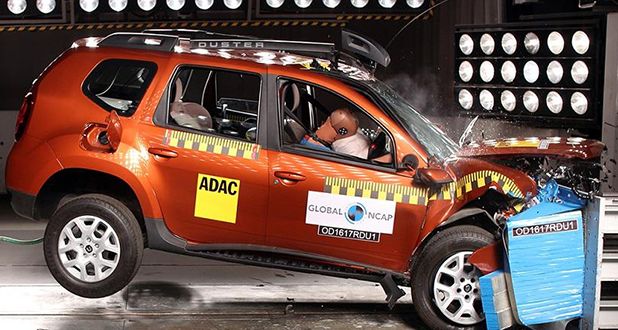 India bound Renault Duster in it’s without airbags avatar has scored a disappointing zero star rating in the Global NCAP crash tests. Under #SaferCarsForIndia campaign, India’s popular SUV Duster base variant scored a drastic zero in adult occupant protection. However with an optional driver airbag, the SUV delivered an improved score of 3 stars in the same segment. The absence of airbags puts driver and co-passenger at high risk of injuries.

During the test it was found that the SUV had smaller airbag which exposed the driver’s head to steering wheel and consequently increasing the risk of fatal injuries. The South American version which was tested in 2015 had a larger airbag that covered the head as well as the neck and chest of the driver reducing the risk of injuries.

The India- made Duster doesn’t come with driver airbag or even ABS (anti-lock braking system) as standard. These two features are available only in RxS and RxZ variants while RxL trim only has a driver airbag and ABS. Honda BR-V and Hyundai Creta both comes with dual front airbags and ABS as standard.

India will soon adopt new crash test norms from October 2017 that will adopt the testing protocol at 56km/hr for frontal and side impact crash tests. However, it is still lower than Global NCAP’s 64 km/hr crash norms.

David Ward, Secretary General of Global NCAP said: “It is troubling that during the UN Road Safety Week we yet again encounter a zero star car in our crash testing in India. Renault produces the Duster in a number of markets and yet it seems content to provide a version for India which falls so far short on safety. The version of the Duster with an airbag scores three stars, but this too fell short as it was fitted with a smaller airbag. A model with a correctly sized airbag should be provided as standard.”