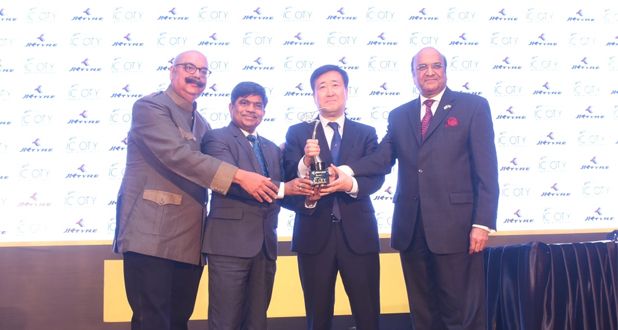 After winning the popular 2016 Car and Bike award in the Best Compact SUV/Crossover group, the Creta has now bagged the most popular Indian Car of the Year (ICOTY) 2016 award. As the most cherished and trusted car maker in India, Hyundai Motors India has 3 ICOTY’s successively in its cap for its products Grand i10, Elite i20 and CRETA as ICOTY 2014, 2015 and 2016 respectively. Prior to this, it was Hyundai i10 that won the ICOTY Award in the year 2008.

With the ICOTY 2016, Hyundai Motors India became the only car manufacturer to get four ICOTY award. This award is given after checking the cars on various parameters such as price, styling, fuel economy, comfort, performance, practicality, safety, technical innovation, money value and the vehicle’s aptness for Indian road conditions. Creta underwent all such aspects and came up with gold and silver.

On receiving this award, MD and CEO of Hyundai Motors India Ltd, Mr. Y K Koo said, “We are honored to win the most prominent automotive award – ‘Indian Car of the Year 2016’ for our make in India, made for the world product- the Perfect SUV- Hyundai Creta. The Creta is a true face of ‘New Age’ Hyundai setting new standards in the industry. Winning the third consecutive ICOTY award represents the faith and belief of customers in the brand. We thank all our customers, partners, media and jurors who have chosen Creta as the Indian Car of the Year 2016 and made Hyundai the most loved and trusted car manufacturer. With innovation at its core, Hyundai is committed to make global quality products with cutting edge technologies and fortify the Hyundai brand, caring for our customers in India and global markets.”

The design of Hyundai Creta compact SUV is based on the most admired Fluidic Sculpture 2.0 design philosophy. In addition to this, enhancing the design and looks of the car, the Creta comes on road with large chrome hexagonal grille, a 17 inch diamond cut alloy wheels and projector head lamps with LED lights (daytime running).