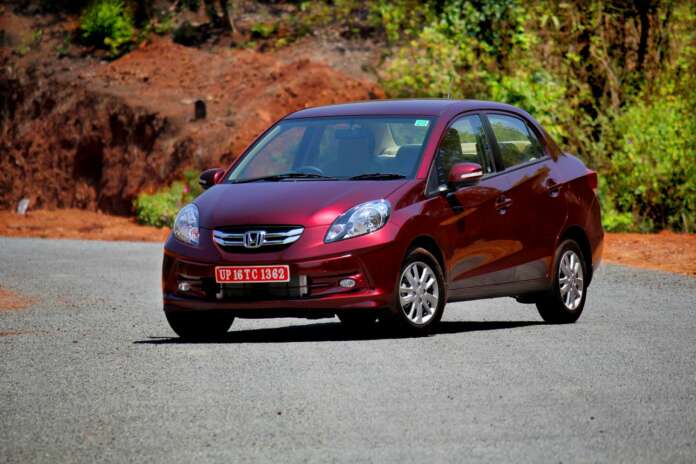 While a group of experts call Honda Amaze a small and compact car others call it a good package. The front is same as the Brio but for the grill part, the rear lamps are reminder of the City. On the rear, seats are more spacious than Dzire offering huge 400l boot space. Among the pros are the power and performance of diesel engine and the fuel efficiency of 25.8 km/l being highest among all cars in India and not to forget the reliability and good ownership experience. Among the cons are comparatively less dynamic than Toyata Etios & Ford Fiesta Classic and long waiting periods because of only 10,000 cars/pm manufacture rate.

Design & Interiors: – The best part of the exterior is the crease lines that run along the sides of the car making it as aerodynamic as possible and give it a standard sedan look. The rear has been paid special attention by the engineers keeping in mind the ample boot and head space along with the accessory pockets right in the middle of the seat to hold bottles and side pockets to hold magazines. The interior color scheme of single beige tone creates its own aura and gives a royal feeling of being in the cabin. The bold Headlights at the front and the fog lamps and rear defogger add to the convenience.

The highest variant VX has driver seat height adjustment with difference of 50mm between the highest and lowest level along with audio controls on the steering. The steering is power driven and freaking smooth. With 5 speeds FWD and 1 reverse gear, the shifts are quick adding to easy maneuverability. Though the audio system is fairly good with the USB and AUX compatibility, but to its disadvantage it lacks climate control feature and folding up of rear seats indicating cost cutting. However, the unique windshields have heat absorbing capability unlike Brio.

Performance: – Honda and Diesel are two words which have been paired so well this time with the advent of Amaze that the peers will have to watch closely to stay in competition. With the DOHC i-DTEC engine and whopping 25.8km/l mileage it contributes heavily in saving your pocket. NVH or the noise, vibration and harshness is much controlled for both diesel and petrol at low revs, but not so controlled at high revs. The automatic brakes continue to impress you on smooth roads but on twisty narrow roads of Goa where this test drive was taken realized the need of manual braking systems, also the MRF tyres used on the test car had a satisfying grip preventing slip.

Another expert quotes that the ride of Amaze isn’t as smooth as that of Chevrolet Sail that is quite smooth on bumpy roads, but agrees that Amaze is smooth on curves and turns. He also recommends improvements in the grip of the tyre to reduce the braking distance. Counting on the safety features like ABS and airbags he isn’t disappointed with Amaze.

Well, overall the Amaze has set a benchmark in diesel engine car with intelligent interiors and unique exteriors; Amaze has already created hype in Indian market because people are ready to pay few extra thousand bucks than Dzire to try it out!