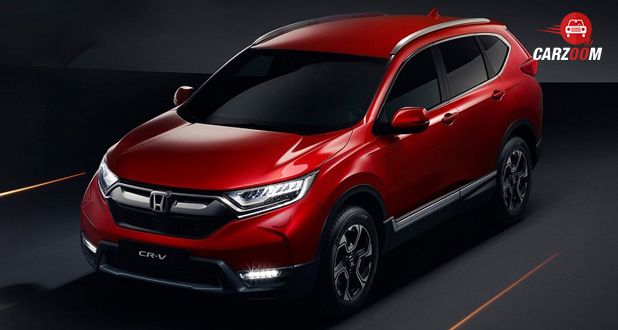 The launch of CRV has been finalized and the company says that it will be in India by October this year and  will be larger than its predecessor. The SUV will come with a diesel engine. Here we bring what the Honda CR-V is expected to come with.

Though the final specifications of the car for India have not been finalized, but it is said to have a powered driver’s seat, dual-zone climate control and a 7.0-inch touchscreen with Apple CarPlay and Android Auto.  The car will be assembled in India and for the first time will have third row of seats. We are expecting it to have 18-inch alloy wheels, leather upholstery and it is also confirmed that it will get ‘Honda Sensing’. Moreover it will possess lane assist, lane departure warning, collision mitigation braking system and more.

The engine will offer a 1.6-litre unit from Honda’s Earth Dreams engine family. To keep the price low the company has opted to bring the single-turbo rather than the twin-turbo version of the engine to India. In a single turbo guise there will be a 1.6 diesel engine that produces 120hp and 300Nm torque and will be mated to a nine-speed automatic transmission with paddle shifters as standard. There will also be an option of an all-wheel drive. The company has decided to give the manual gearbox a miss for the Indian market. On the contrary, the petrol variant will have a 2.0-litre petrol engine mated to a continuously variable transmission. This petrol engine produces 154hp and 189Nm torque and is identical to the Hyudai Tuscan. The petrol CR-V will solely be available in the front-wheel-drive form.

The price for the car is expected to be around 28 lakh INR (estimated, ex-showroom). Honda will follow up the launch of the CR-V with  Civic. The Civic too will be available with the same engine-gearbox as the CR-V.