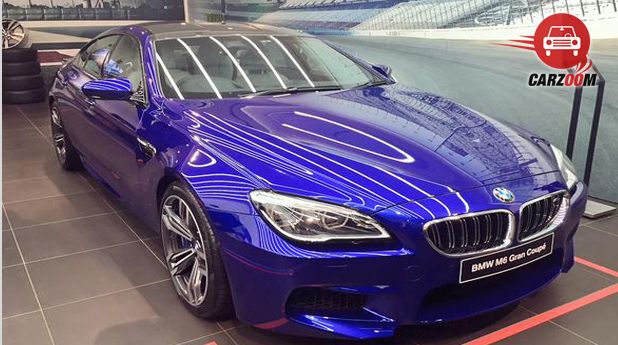 BMW have launched the 2015 version of M6 Gran coupe in India at a staggering price range of Rs. 1.70 Crore (ex-showroom Delhi). The new model now joins the torrent of M brand cars that the company has launched in India in 2015 which includes M3 and M4. The car comes with a few updates in the exterior front including new adaptive headlamps, revised front grill, redesigned front bumper and taillights but they are quite difficult to spot unless you are BMW enthusiasts.

On the Inside too, it gets a few changes but they are minor ones like BMW claims that the central console is now more driver centric. While other updates are only confined to an updated infotainment system and new telematics. Other features remain same like automatic ac with four zone control, ambient with mood lighting, rear AC vents, premium leather upholstery, lumbar support for seats and electric steering column with memory function.

Mechanically, it continues to draw power from a 4.4 litre V8 engine capable of 552bhp max [email protected] (567bhp with an optional competition package) and 680 Nm [email protected] mated to a 7-speed M-DCT gearbox. The M6 Gran Coupé goes to 100kph from a standstill in just 4.2 seconds and has a limited top speed of 250kph. The facelifted M6 also comes with start-stop technology which enables it to deliver a fuel economy of 10.10 Kmpl.

Along with the launch of 2015 M6 Gran Coupe BMW has also inaugurated first ever M studio in Mumbai. Quite similar to Mercedes AMG performance centers, the BMW M studios showcases exclusive M cars and customers can also opt for M packages at the studio. BMW plans to set 6 more such exclusive M studios in other cities including Delhi, Chennai, Bangalore, Pune and Hyderabad by 2016.

BMW has also announced that they are looking to invest Rs. 110 Crore in its Financial Arm known as BMW financial services. This investment is especially for Indian market entitled for new manufacturing plant which aims to make their products even more accessible for the Indian customers. BMW will also launch the X5M and the X6M in India this month and will be imported to the country via CBU route.