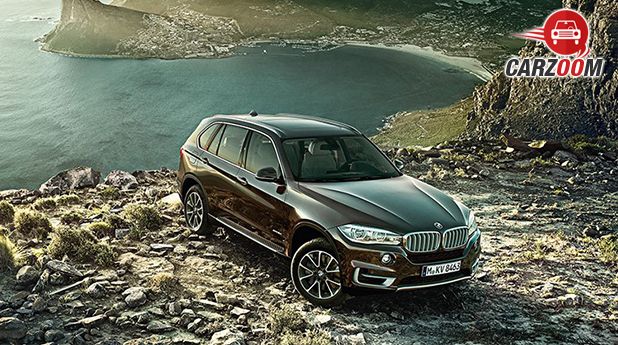 New BMW X5 SUV competes with Volvo XC90, Audi Q7 and Mercedes-Benz GLE in India. It was first launched in May 2013 and showcased at 2014 Auto Expo. Initially, it was launched with a single engine option i.e. 3.0-litre 5-cylinder inline diesel engine. The German Giant for the first time has launched petrol powered variant of Big SUV X5 christened as xDrive35i in India. Like BMW X3 xDrive28i, the new grade of X5 will also be locally assembled at BMW’s Chennai Plant and it sets you back at Rs. 73.50 lakh (ex-showroom Delhi).

The new BMW X5 is lighter than its predecessor and offer better riding dynamics and traction flanked by powerhouse petrol engine. The three cylinder in-line petrol mill develops 306hp of max [email protected] along with 400Nm of maximum torque between 1200-5000rpm. The engine is coupled to an eight-speed Steptronic automatic transmission and power is sent to all four wheels via BMW x-Drive, the intelligent AWD system. The brute SUV can go 0-100km in just 6.5 seconds while offering the top speed of 235km/hr.

Speaking on the introduction, Mr. Frank Schloeder, acting President, BMW Group India said, “BMW petrol engines are a potent mixture of dynamics and efficiency, and with the launch of the new BMW X3 and new BMW X5 in petrol variants, we are offering our customers yet another form of ‘Sheer Driving Pleasure’. We are presenting a significantly balanced and extremely aspirational product portfolio with the choice of both diesel and petrol variants to suit all our customer requirements. The latest generation of BMW engines guarantee a thrilling power delivery and excellent responsiveness which generates a dynamic proposition on the road and gives assured driving pleasure.”