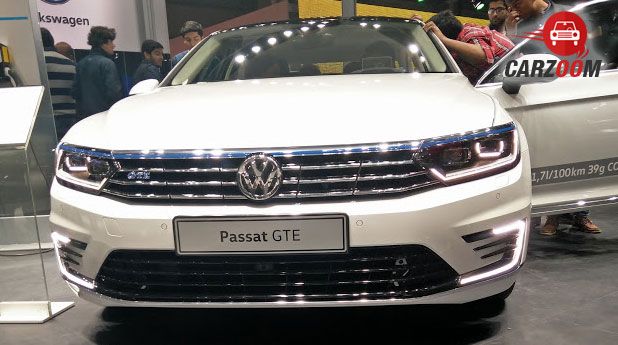 The German Auto giant, Volkswagen has showcased the Passat GTE which is a hybrid version of the premium sedan at the auto expo. In its eighth generation, the car will be replacing the aging model in India as it is already available in some international markets. The GTE hybrid version is powered by company’s E hybrid technology and claims to deliver efficiency figures of 50KMPL.

Under the hood it boasts of tuned version of 1.4l Turbocharged petrol engine that develops around 154bhp max power. The sedan is available with an electric motor which produces 113bhp and it can cover 50km while the fusion of both motors collectively belts out 215bhp and 400Nm of peak torque, it can offer remarkable 1000km range. The motor is linked to a 6-speed dual clutch automatic gearbox.

The 9.9kWh lithium ion battery can be fully charged in 4hr 15mins via 240V, though customers can opt for an optional 360V/ 3.6 quick charger which can provide full charge in 2hr 30min. It is also equipped with regenerative braking which also charge the battery.

Powering the front wheel, the car can make 0-100km sprint in 7.9 seconds while offering the top speed of 219km/hr in petrol motor and 129km/hr in electric motor. The GTE will get four driving modes- Hybrid, E-mode, battery charge and GTE.

The front fascia of GTE Passat looks striking thanks to new tri slat front grille with blue color accents flanked by new headlamps with LED DRLs, refresh bumpers and GTE decals on the sides. There is a 6.5 inch touchscreen display that provides useful information about the car, engine etc. When launched Passat GTE will be priced at Rs. 40 lakh (ex-showroom) and will take on Toyota Camry Hybrid. Alongside, Passat hybrid GTE Volkswagen also showcased Tiguan SUV, Ameo compact sedan etc.