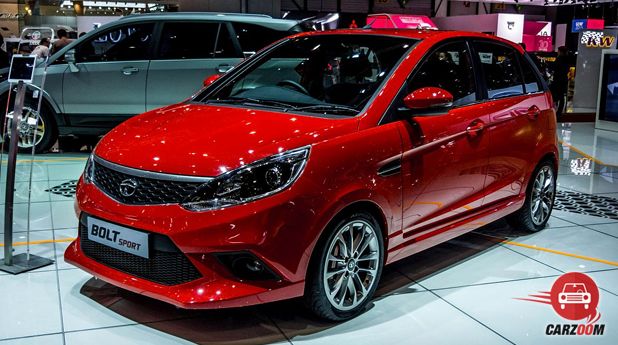 At this year’s Auto Expo Tata Motors is grabbing everyone’s attention as they have put over 20 new vehicles across commercial and passenger vehicle sections. Apart from new Zica and Zica 5 sedan, there is another car in the arena Sport edition of Bolt premium hatchback that’s grabbing eye balls alongside sportier version of Safari Storme. The Bolt Sport made its first appearance at the 2015 Geneva Motor show.

The Performance version of Bolt might be launched under the new sub-brand. Powering it is an altered version of a 1.2 litre turbocharged MPFi petrol motor which is now tuned to deliver [email protected] of max output and 170Nm of peak [email protected]3000-3800rpm, linked to a 5-speed manual gearbox. The modified engine facilitates the model to attain 100km/hr mark from a standstill under 12 seconds with a top speed close to 170-180km/hr.

To match the sportier outside profile, it boasts calibrated electric power steering, leather upholstery with contrast red stitching, red accents all around and advanced Harmon Kardon infotainment system with Voice recognition, SMS read out, USB and Aux-in support. In terms of Safety, it will sport with dual front airbags, ABS with EBD and other essential features.