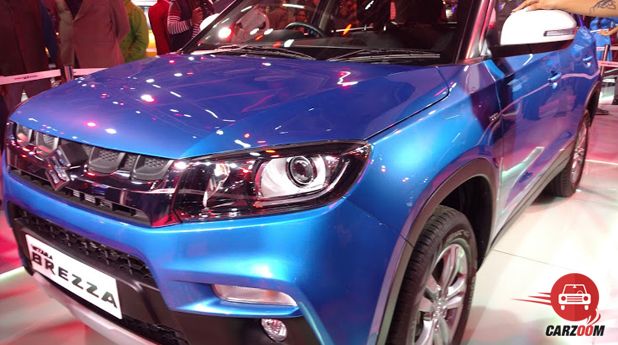 At 2016 Auto Expo, Maruti’s showstopper has been the Vitara Brezza which is set to make debut in March. Many dealers across the major cities have started accepting the bookings for a token money of Rs. 21,000. The Brezza is previewed with XA Alpha name at the 2012 auto expo and it is first sub 4 metre SUV from the auto giant to be pitched in the rapidly growing segment against Ford EcoSport.

According to Maruti, Rs. 860 crores have been spent for the research and development (R&D) of the product and around 98 percent localization have been achieved which help it price it competitively. Like Ciaz and New Ertiga, we might see SHVS (Smart hybrid vehicle system) on Vitara Brezza as well.

At the time of launch, Brezza will be launched with a diesel engine option which includes 1.3 litre Multijet DDis diesel engine developing 89bhp power@4000rpm and 200Nm of high [email protected] matched to a 5-speed manual transmission. However at a later stage it might get a petrol engine along with a CVT gearbox. Mahindra TUV300 and Ford EcoSport are equipped with more powerful engines.

As said it is a Sub 4-meter vehicle with dimensions like 3995mm in length, 1790mm width, 1640mm tall and has a wheelbase of 2500mm. It comes with an impressive ground clearance of 198mm and 328 liters of cargo volume. In terms of design, it bears projector/halogen headlamp units, wide honeycomb air dam, H shaped grille, black body cladding and contrast roof color, flared wheel arches, two piece tail lamps adds to the squarish stance of the SUV.

Cabin is mixture of already seen and fresh elements such as big touchscreen infotainment system with voice recognition, multi function steering wheel, push start button, cooled glove box, reverse parking camera etc. For the safety of the occupants, it will get dual front airbags, ABS, EBD, seat belt pretensioners as standard across the variants along with other optional safety features.

Thanks to extensive localization levels, Maruti Suzuki Brezza is expected to be priced between Rs. 6.8 to 9.7 lakh (ex-showroom).