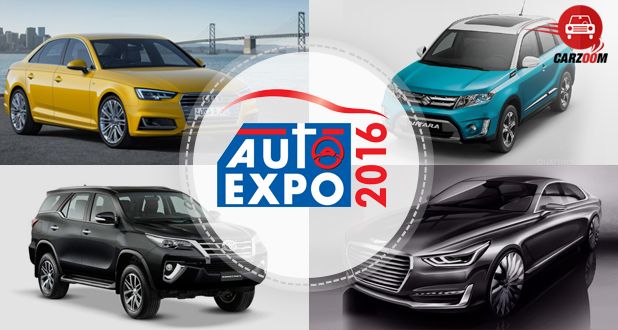 The most anticipated, India’s biggest and Asia’s largest motor show ‘The Auto Expo’ kicks off today and will last till 9th February 2016. This edition is hyped as the better and biggest one yet owing to several domestic and foreign carmakers participation. During this 13th edition of Indian auto expo about 80 new vehicles are expected to be showcased or launched. This event takes place at India Expo mart, Greater Noida organized and managed by Confederation of Indian Industry (CII), Society of Indian Automobile manufactures (SIAM) and automotive component manufacturers association (ACMA).

Like last year, the event is sub divided into two parts:-

The Show is the probably the biggest and vast platform for the carmakers to create buzz for their new models. The carmakers like Tata, Hyundai and Maruti Suzuki etc have already showcased their respective new vehicles such as Zica, Tucson SUV and Vitara Brezza. We compiled a list of car exhibitors with their expected new vehicles at 2016 auto expo.