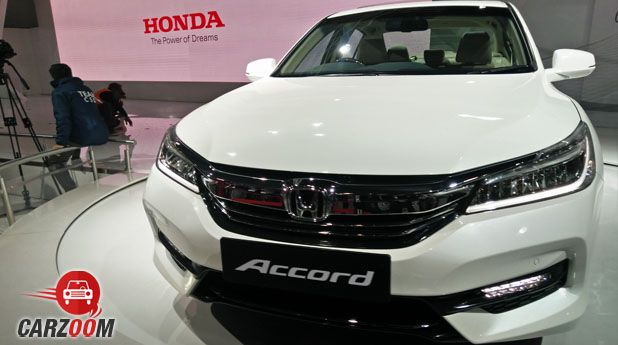 Honda Cars has revealed the new Gen Accord at the culminated 13th edition of auto Expo as it is geared up to make comeback in the Indian market. Honda Accord was once not only the favorite car among the enthusiast but also the benchmark setter and best seller in the segment. But in the year 2013, the premium sedan said good bye to the Indian market owing to poor response.

Currently in its ninth generation, Accord is already on sale in various international markets since July 2015 and expected to hit Indian market this year. To be brought via CBU (Completely built up unit), it has been showcased in the Hybrid version which will take on Toyota Camry in the segment. It will cost 5-6 lakhs more than the Standard model around Rs. 28-30 lakhs (ex-showroom).

The new GEN Honda Accord will be offered with two engines- 2.4l Liter Petrol engine that develops max output of 185bhp and 245Nm of high torque, another will be a 3.5l V6 petrol engine producing 278bhp power and 342Nm of peak torque. Both the engines are linked to a six-speed manual or an automatic gearbox.

The new Model sports an array of cosmetic upgrades both outside and inside like it features with all new two spoke front grille with thick chrome line housing Honda’s logo, sweptback headlamps with LED DRLs, redesigned front bumpers and front diffuser with black shade lends muscular look to the sedan. While two subtle creases on the sides and chrome window line adds to the sophisticated design of the car. The sculpted bumpers, elongated LED tail lights make rear stylish and eye pleasing.