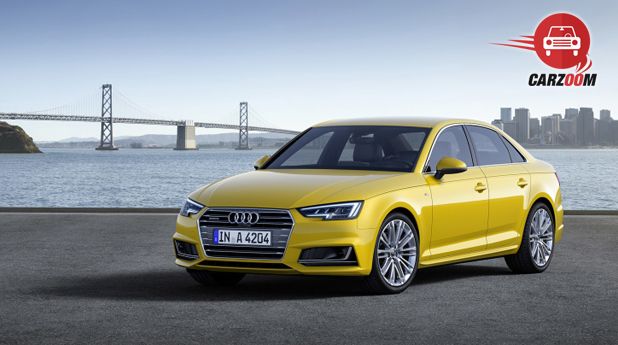 Audi has finally taken the wraps off the new GEN A4 after numerous spy shots, rumors and teasers. This is the fifth generation model for Audi A4 which will make its public debut at the 2015 Frankfurt motor show in September 2015 and it will on sale at the end of this year in Europe. However, the cosmetic changes don’t seem too radical but the new model look leaner, sharper and refreshed than before.

As compared to the outgoing model, new A4 looks striking with sharper headlights with LED DRLs like TT coupe and R8, single frame front grille and a revised bulbous bonnet. Coming to the sides, the fifth GEN A4 gets new alloy wheels and door mounted OVRMs while rear flaunts new sharp tail lights with traditional LED graphics.

2016 Audi A4 is now 4724mm long, 1842mm wide and 1427mm tall, making it 16mm wider and 25mm longer than its predecessor. Though, the company claims that new A4 provides 24mm more headroom, 23mm more legroom and 11mm more shoulder space at rear than the outgoing model. Despite of increase in dimensions, the next GEN A4 is 120kg lighter as it is based on Audi’s MQB platform.

Unlike exteriors, the cabin of new A4 gets the most substantial and noticeable changes. The first thing which will grab your attention is a 12.3 inch digital instrument cluster that also features in TT coupe. There is an 8.3 inch display screen coupled with Audi MMI system, bang and Olufsen audio system with 3D surround sound technology, 19 speakers and also supports Android auto and Apple car Play.

The top spec 3.0L engine will mated to an 8-speed S-tronic automatic gearbox while the rest of the variants will come paired with a 6-speed manual or 7-speed S tronic automatic transmission.

The current model has been in the market for more than eight years now and started to look dated in front of new Mercedes-Benz C-class and BMW 3 series. So, revealing new Audi A4 is the right and timely move by the German car maker. We expect new A4 sedan to reach Indian shores by early 2016.