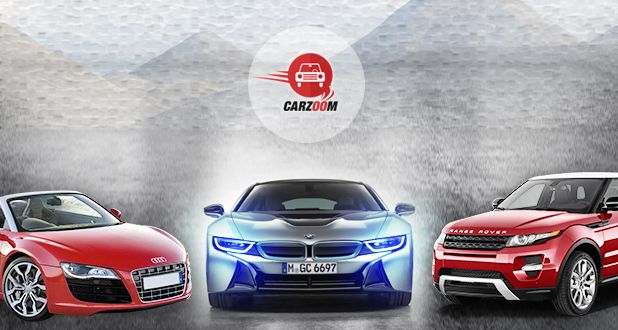 Luxury cars are symbol of individual class and persona. Such cars are not only greatly comfortable but also are towering the limits of power and style. In the middle of busy schedules and Indian traffic, a luxury car presents you that much needed leisure space. In the present scenario, scores of international car makers have endeavored into the Indian market with the exquisite lot of luxury cars. Let’s have a look!

The most luxurious SUV launched by Land Rover till today. Evoque is described as an electrifying vehicle which is a combination of magnificent and modish design with elegant and pioneering technology. This car is enthused by the Land Rover LRX. Range Rover Evoque has two diverse models, first is the Evoque, which comes with five doors and the second is Evoque Coupe, the three door model. Both models offer a selection of three streams which are named as Pure, Prestige and Dynamic. The outstanding features of the Evoque have been positively commended by auto buffs, plus it also grabbed various awards, one of which is 2011 Auto Express Car of the Year award. Also, Evoque has been awarded as the 2011 Car of the Year at the prominent Technology of the Year Ceremony in London, between tough war from the competitors like Ferrari FF, Renault Twizy, Ford Focus, Nissan Leaf and MINI Coupe. This honor appeared as a feather in the cap of Range Rover.

There is hardly any car lover in the earth who isn’t aware of the name ‘Lamborghini’. The vehicles offered by the company have captured the bedroom walls of many of kids as posters. These luxury cars, in reality possess looks like those imaginary future cars, sound OMG and can fly faster than the majority of other cars on the planet. The Huracan is now known as the most promising vehicle in urban Indian roads. It is additionally advanced, improved built, extra comfortable, better outfitted and more powerful than the already wonderful Gallardo. At a take under INR 3.5 crores, ex-showroom, New Delhi, India, this car may have a giant price tag but the once you ride it, you’ll cross all the benchmarked heights of comfort and luxury.

BMW have put everything they can in the making of this hybrid sports car. Whether it is comfort, styling, features or performance are all are just stellar. On the other hand, that is not the point as the world has become more aware of environment change and the unwanted contribution that cars have made to it. This car is famous for its splendid performance and also, does not deliver horrifying consequences to our globe. The BMW i8 citing Neil Armstrong is truthfully one enormous leap for humanity and mankind. BMW is counted among one of those companies that have fetched cars that shove the exterior of the envelope in terms of appearance, performance, features and everything else. With the current state of mind of ‘go green’, BMW has introduced the i8 hybrid sports car to India.

The Lamborghini Aventador has grown uncompromisingly from selling 2-3 cars per year to annual sales of whooping 17 cars. This crore-plus worth automobile have not only marked their craze in cities but have also been status symbols to some celebs in the town. One of the two marvelous sports cars from the world famous Italian car maker’s collection is the astounding Aventador. Launched in the year 2011, this car, with its wonderful show, made patrons spell bound. Due to its powerful engine and aerodynamics, this car is quicker than its sibling the Gallardo. The Lamborghini Aventador LP 700-4 is designed to run wild in the jungle of concrete like a vigorous animal. The designers at Lamborghini have worked on various aspects such as brakes, suspensions and chassis. In addition to this, they build an incredible supportive system which creates the whole new levels of speed driving where drivers can test their limits.

Land Rover is identified for their luminous SUVs. No other brand has produced such vehicles that can cross any type of terrain that Planet Earth offers. In the present scenario, extreme ruggedness and can-go-anywhere capability even as cherishing its riders with opulent luxury has become the new trademark of Land Rovers. This car is a stiffened, slightly smaller and a little faster version of its big brother, the real Range Rover. Although, this car highlights some attractive features such as the more unbending chassis and large wheels, this one is designed so that it can spend the greater part of its life on road. Actually nothing can beat capability of the Range Rover Sport. You can take it on lengthy highways, jam-packed city roads, fat mud, unfastened gravel or even deep water, this car will definitely live out loud everywhere. In Indian, context, it has the seats to offer to 7 people, it can drive very comfortably carrying your family, luggage and even your pet!

Mercedes launched the G 63 AMG in India which is as well one of their best ever serving vehicles being still in making. G Class is known for its archetypal boxy shape and potent driving abilities and the AMG version amplifies the dynamic quality of this legendary car. Mercedes launched this SUV to India almost a year following to its exclusive debut in international markets. Mercedes Benz launched the G63 AMG at a price of INR 1.45 crores (ex-showroom) in India. Certainly, it’s available for the few who could pay such a hefty price to flaunt royalty, class and legacy. Yes, it may be horribly pricey but for those who can shell out such amount of money, no other car stand close in terms of luxury, high performance. G63 AMG is the best buy as a status symbol.

The Ghost is the luxury sedan offered by Rolls-Royce and quite possibly, the most powerful Rolls-Royce produced so far. It is outcome to salute the Silver Ghost, a car first produced in 1906. The Rolls Royce Ghost is designed to compete with the Bentley Continental Flying Spur and Maserati Quattroporte. Also, for introducing a lower price class for Rolls models. This car is earliest in a new Rolls Royce model series, other than the Phantom family which consists of Phantom, Phantom Drophead Coupe, Phantom Extended Wheelbase and Phantom Coupe.

Audi R8 Spyder is the sports car which takes off its rigid roof to appear more fashionable and also to let the driver take pleasure in the ecstasy driving in open air at high speed. It is unveiled in Indian market in 2011. The automobile has been fancied with the gigantic engine which is well known to draw out more power. Audi R8 Spyder is purely a sensation when it touches speed and ultimately looks graceful. The interior is built as like racing cars so that the driver can feel the bond with the car flawlessly and get the best out of every single drive. This car comes with a swarm of colors for interior, leather seats and exterior body as well. The fabric too has three color variants: Red, Black and brown.

The Porsche Panamera is a four door, four seated luxury sedan. The name of the car is obtained from Carrera Panamericana, the renowned long distance race event. Interestingly, this car is considered as a fruit produced after a prolonged wait of Porsche’s 989 concept from the late 1980s. The Porsche Panamera is popularized as a straight contestant to cars such as the Mercedes-Benz CLS63 AMG, Maserati Quattroporte, Aston Martin Rapide and Lamborghini Estoque. The Panamera is a front engined car with back wheel drive with a four wheel drive model as well. This sedan is an exceptional sports car with rich space for four and luggage.

Price is not the constraint when there are such brands who will serve you with entire royalty. These cars shall add elegancy and class to your bucket of desires. So, if you have a room full of currency then they deserve to be spending here.